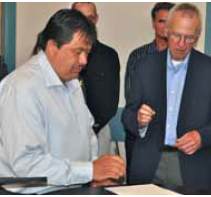 There were a few surprises in store on April 25 when leaders from First Nations, local governments and business attended the Power In Numbers event at Stz’uminus First Nation.

And the big one came first. Chief John Elliott and Don Hubbard, operations manager for RCR Mining, kicked off the standingroom-only event by signing a memorandum of understanding (MOU) for what could become a major revenue generator for the nation in the years to come.

The proposed Sognidoro mine, west of Ladysmith in Stz’uminus traditional territory, had the potential to produce minerals, jobs and wealth for many generations. For Chief Elliott, the MOU was “an opportunity to build a partnership”. And that was precisely the sort of relationship that the second annual Power In Numbers was all about.