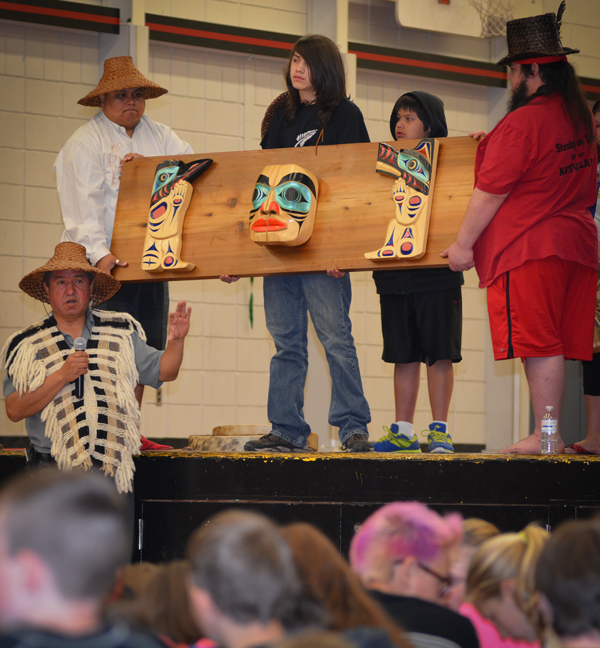 The transformation mask represents the spirit that was taken from native people by residential schools. It is called The Indian in the Child.   – Darren Blaney

One day Kai Blaney, son of Homalco councillor and artist Darren Blaney, came home from school with a surprising story.

When Kai’s fellow students were looking at an old photo of residential school students, they noticed the profound sadness in their eyes and thought it was because the children had perhaps simply missed a school field trip. Kai explained that the children looked so sad because they had been taken from their families when they were very young.

This inspired his father to create a piece of art in order to share the history and culture of his people with the students at Southgate Middle School in Campbell River. He designed a transformation mask to represent the spirit that was taken from native people by residential schools and called it The Indian in the Child’. Two other carvings of Raven and Wolf were mounted on either side of the mask on a large cedar plank.

The creation was unveiled at the school on May 6 and it will remain on display for students to observe and will become a part of teachings about the deep-rooted impacts of residential schools.

Darren shared what the carvings mean and how they reflected Homalco’s traditional creation story. 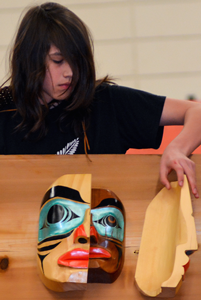 The transformation mask is really two masks in one. The outer mask, made of yellow cedar, represents the colonialist methods that attempted to assimilate First Nations people. An inner mask of red cedar represents the child before residential school.

“When the children were taken out of their communities, the teachings were not that engrained in them so it was easy to wipe it away,” Darren said.

The carvings on each side of the mask also had a story, he said. “Raven, in traditional stories, was called upon to deal with any issues that arose. Raven brought our people together and is connecting us back to the land. The wolf is where our people come from, part of the creation story.”

Here is one version of the Homalco Creation Story.

Children were told not to play around the pine trees and not to play with the tree’s pitch because it was like a medicine. Although her grandmother warned her against playing near the trees, the girl did not listen. One day she went to the trees and played there. She ate the pitch and got pregnant.

She was banished from the village and made to live down by river where she dug clams for sustenance. Raven told the grandmother to give the girl a large horse-clam shell with an ember in it so she could have a fire and stay warm throughout the winter.

The girl gave birth to eleven puppies. The longhouses were just up from the beach where the puppies would sleep. The new mother would hear noises coming from the longhouses and would go up to take a look. Every time she went up and looked in the window it would be dark and they would all be sleeping.

One night, while down by the river, she placed her hat and cape on her clam digging stick, to appear as if she was digging for clams. She snuck up to the long house and peered into the window. The puppies had shed their skins and they were dancing naked, in human form, by the fire.

The mother went into the longhouse and threw all the skins onto the fire. Because of this the puppies had to remain human after that.