We Are All in this Together 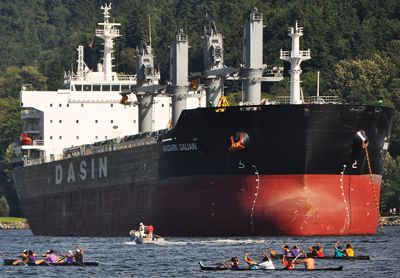 It’s funny how life works sometimes. In late March, people from First Nations around the Salish Sea met at T’Sou-ke with representatives of the Coast Guard, Transport Canada and others at a marine risk summit about what might happen if and when oil spills into our waters.

Two weeks later, many of the same people were seriously involved in a very real oil spill in Vancouver’s harbour. As spills go, this one was pretty small stuff. But the ripples spread far among the  seven million of us living around the Salish Sea.

It is easy to point fingers and play the blame game. It is far more difficult, and far more productive, to look at the big picture using genuine precautionary principles.

If there was a single message that came from the T’Sou-ke summit—and from many others after the real oil spill—it was that all our lives must change in the face of climate change.

As one Coast Salish woman asked the Coast Guard spokesman at the summit, “Why should we allow dirty oil exports by a non-Canadian corporation so that China’s consumers can be just like us?”

Rampant consumerism, personal and corporate greed are just a few of the larger issues that confront us. A small bunker fuel spill in English Bay is just…a drop in the bucket.

Heroes in the Nick of Time