They Say you should hang all your troubles and anger on the big nail beside the door into the bighouse so that such things do not affect the important work around the fires. 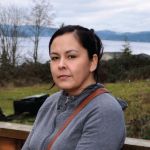 A nation’s leader recently said, while shaking a finger in face: “You are that nail. The Sentinel. Your magazine. You are a witness. Tell the good stories. But tell the bad ones too. Things need to be said. That’s your work. Do it!”

Those words came after our last issue of the magazine raised the hackles of some readers. The article in question was a story about Chief Caroline Harry and the ongoing challenges facing Malahat Nation.

When we last saw Caroline at the annual general meeting of Naut’sa mawt Tribal Council, she smiled that wonderful shy/strong smile that probably helped get her elected as the nation’s first female chief last November.

That she can smile at all seems quite remarkable. Caroline came into the job late last year as a result of a special election that was called after the resignations of the former chief and councillors. It was also after two other bombshell announcements: that Malahat had signed on to a project by Steelhead LNG and that the nation had purchased the nearby Bamberton industrial lands overlooking Saanich Inlet. But that was last year.

In January, Caroline sat over lunch and talked to us about her life as a woman, a mother and a leader.

She almost simmered as she spoke about how she was not allowed to speak about things, about deals that had been made and about the needs of her small but growing community. There were legal, political and other reasons for her relative silence.

We used that talk for the short, and vaguely informative, article in our February issue. But, as The Sentinel went to the printing press, more amazing things happened. Three senior employees were dismissed and more evidence emerged of odd financial goings-on.

But still Caroline smiled. And spoke quietly and strongly, off the record, about things like greed, betrayal and untruthfulness. And about all the important work that her community needs to do and the things they need to know about.

Meanwhile, Steelhead LNG is pretty silent about the things going on with its major partner, Malahat Nation. The company must be well aware of the quagmire, hopefully very short-term, and it should be a good corporate citizen and send its people back to the nation with suspended contracts that were signed by Malahat staff and leaders who are now nowhere to be seen.

We understand the business concerns of Steelhead and the mad panic for the BC government to get an LNG project up and running before the provincial election in 2017.

But the main focus, at least for a while, should be for everyone concerned to support and help strengthen a nation in a time of great need. When citizens call leadership and governance into question, no amount of public relations spin can fix things.

It takes new, strong leaders to emerge. ‘Outsiders’ – whether well-meaning staff or caring corporations – cannot provide answers. But their assistance and commitment is essential.