Fire is much in the minds of everyone these days as an unusually dry spring, and careless humans, cause wildfires in our forests. But things can be just as dangerous in our homes, which is why smoke alarms are vital a ‘first responder’.

Smoke alarms are being installed in Snaw-naw-as First Nation homes at an unprecedented pace. The same is true in many communities, especially those who have experienced tragic fires like the 2012 incident in which two children died at the community overlooking Nanoose Bay. 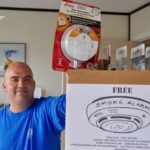 As Scott Wimpney handed out the alarms from his reception desk at Snaw-naw-as, Karen Bob said that at least ten cartons containing more than 100 of the devices had recently been distributed to members.

The alarm hand-outs come as shocking BC statistics reveal that the odds of deaths in First Nations residential structure fires are more than double that of the general population.

Those figures represent real persons, families, elders and children. The aftermath of home fires is devastating, not for just those involved directly, but for entire communities.

Steven and Gwen Point of Skowkale First Nation are among those involved in the BC Working Smoke Alarm Movement.

Its catalyst is Len Garis, Surrey fire chief and a professor in the school of criminology at the University of the Fraser Valley.

The movement began in 2012 with a goal of ensuring there is a working smoke alarm in every BC home. More than 40,000 smoke alarms have been installed in homes with half going to First Nations.

Youth from Seabird Island and other First Nations have been involved in boot camps on the issue at the Gathering Our Voices youth conference and other venues. Participants learned about the principles of fire as well as the importance of smoke and carbon monoxide alarms. They also put on firefighter gear, climbed ladders and used fire extinguishers and hoses.

Everyone is reminded to make sure smoke alarms have fresh batteries and to never take down a smoke alarm because of a false alarm caused by cooking. New technology is helping too with newer devices having sealed batteries that last 10 years and advanced sensors that help reduce false alarms. If the date of manufacture of any alarm is more than 10 years old, it must be replaced with a new one.

Further safety information can be found at www.safeathome.ca. This article was prepared, in part, by Kidde Canada, a Salish Sea Sentinel advertiser and Canada’s top manufacturer of alarms.