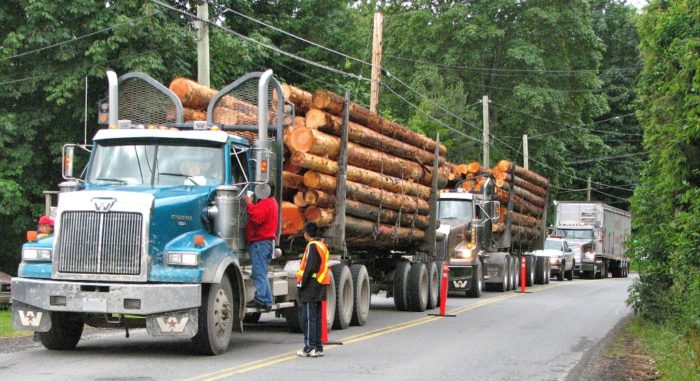 Daniel did his part earlier this year when he made a sign on his living room floor and held it up for the hundreds of logging and chip trucks and other traffic that every day pass through the main Halalt First Nation community. 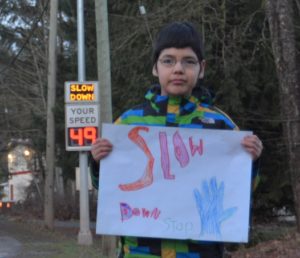 Daniel Page got fed up with cars and trucks speeding on Chemainus Road through Halalt First Nation so he made a sign that he shows to passing motorists. Photo by Tricia Thomas

Now the rest of the nation is deciding what to do next in the wake of the Halalt Road Traffic Bylaw 2016 that was passed and has received serious attention from the local municipality as well as from commercial vehicles heading to the nearby Catalyst pulp mill and Timberwest dry land log sort in Crofton.

“Our community has suffered by having a major highway cut us in two.” Those were the words of Chief James Thomas in July 2007 as Halalt supporters turned out to hold a traffic slowdown and information picket of traffic on Chemainus Road.

Drivers were stopped and handed a leaflet that included the message: “Sorry to inconvenience you, but… The road you are driving on has been ‘inconveniencing’ the Halalt First Nation people for decades.”

Since then, new administration offices and a large community centre have been built. The latter is located adjacent to the nation’s playing fields. Digital speed alert signs are on the adjacent road informing drivers that they are in a 30-kilometers per-hour zone, but speeders are frequent and heavy commercial traffic is almost constant during the day.

But things have changed since the road bylaw was adopted in early March. Weekend industrial traffic has stopped, according to a community member who lives alongside the road.

“I heard they closed the log sort on weekends,” the man (who did not want to be named) told the Sentinel. As he spoke, cars and trucks registering well above the speed limit passed by.

The new bylaw calls for monthly permit fees for commercial vehicles. But Chief Thomas said that: “Residential traffic is welcomed on the condition that visitors respect our village and be courteous to our community members.”

Meanwhile, the council at the municipality of North Cowichan has directed its staff to provide a report commenting on the Halalt bylaw and an April letter from the nation.