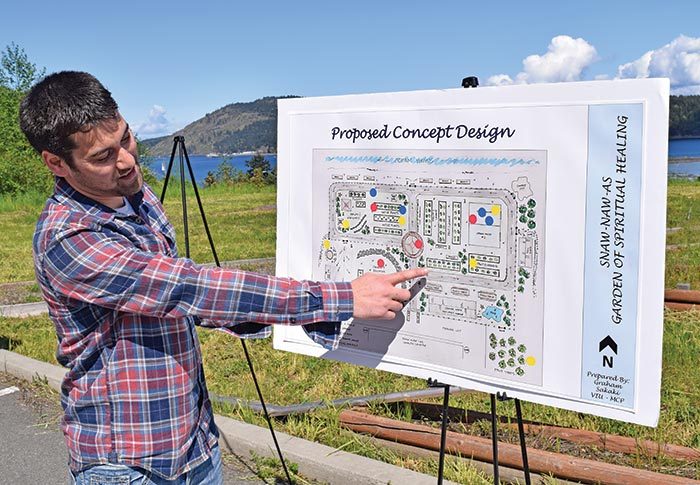 Elder and longtime Snaw-naw-as chief David Bob always took care of his people, whether it was getting the nation’s health centre built or working to revitalize culture.

When he suddenly passed away in January, Bob was making progress on his vision to develop a community healing garden with both medicinal and food plants.

Since then, acting health director Donna Edwards has stepped forward to make sure Bob’s dream becomes a reality.

“Dave would feed the community, he would bring the community together for dinners,” she said. “And then I think, even though he’s gone, with this project, he’s still going to be feeding the people. That touches my heart.”

The Snaw-naw-as Garden of Spiritual Healing has been in talks for a number of years, but Bob had recently started working with Vancouver Island University to plan and fund the project.

On May 6, community members and others involved in the garden gathered to share information about the project with an ethnoecology tour group.

Graham Sakaki, a research co-ordinator with VIU’s Mount Arrowsmith Biosphere Region Research Institute, has been working with Snaw-naw-as to plan out the garden.

Sakaki said plans for the garden include growing medicinal plants and berries, educational signage, a smokehouse and community gathering space.

There will be wide pathways to accommodate those with mobility challenges, and garden boxes at all heights so everyone from children to elders can work with them.

The large space—about the size of half a football field—will be used to educate on language and plants, and a source of food security for Snaw-naw-as.

Construction began in late May, and parts of the garden will be completed in coming months. The full garden, located on a waterfront lot beside the health centre, is expected to be completed by 2019.

“Originally the discussion was around preservation around traditional knowledge and language associated with native plants,” Sakaki said. “Once we started the design process it got a lot bigger. It turned into food security, education and outreach, a sense of community and all these different things adapted over time.”

Sakaki said $20,000 has been raised through grants and sponsorships to construct the garden, with more on the way. He estimates the completed garden will cost about $150,000 including education and outreach.

“I think the biggest highlight was there were so many community members
contributing,” Sakaki said about the planning process. “The idea is that it will benefit youth the most; it’s really a legacy project.”

Edwards said she is excited for the project, which will make Snaw-naw-as’s state-of-the-art health centre—which opened in 2013—even more useful to community members.

“I see the whole entire project as being important not only for the food sustainability, but for the opportunities we have for cultural teachings and having the gathering place to share that,” she said. “I know the benefits it’s going to bring to our community.” 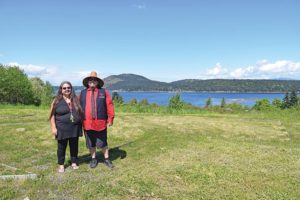 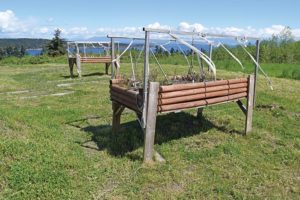 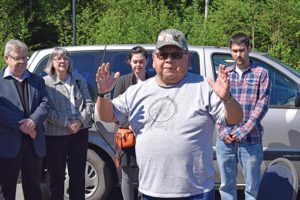 Elder Jim Bob welcomes a tour group to the site of the Snaw-naw-as Garden of Spiritual Healing.