A Coast Salish blanket being shown in Seattle is believed to be the only one in a Northwest museum that’s confirmed to be made with the hair of woolly dogs.

The blanket was already in the Burke Museum’s collection, but was recently tested and proven it was woven with the hair from the now-extinct small canines that were once raised for their coats and shorn like sheep. 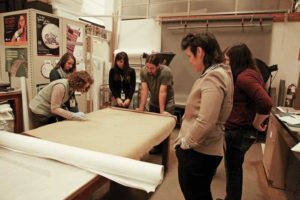 Not much else is known about the blanket’s history, except that it was once owned by a judge who lived in Tacoma, WA, from 1883 – 1990, and was sold to a tourist store in Alaska after he died. It was donated to the museum in 1975.

Coast Salish spinning expert Liz Hammond-Kaarremaa has been studying blankets and robes in the museum’s collection. She said she first suspected something was unusual with the piece when she saw a tear that exposed warp yarns.

“The warp caught my attention but it was the weft that posed the mystery: the weft fiber did not look like mountain goat, nor did it look like sheep wool,” she said in a release.  “It looked like woolly dog hair I had seen at the Smithsonian.”

Woolly dogs were used by Coast Salish people for thousands of years, but went extinct after colonization.

Objects that use the dogs’ hair are now rare because many were destroyed by settlers, lost or disappeared into museum collections.

While weaving with woolly dogs is part of Coast Salish oral traditions and documented in early explorers’ journals, the dogs and the important role they played were lost from popular history—and objects made from their hair were lost, destroyed or disappeared into
museum collections.

“We look forward to sharing the blanket with weavers and other researchers, so that it can be reconnected to the Indigenous knowledge systems from which it came,” she said.

The blanket can be viewed at the Burke Museum’s Testing, Testing, 123 exhibit that’s on display until February.

A recently opened exhibit at the Museum of Anthropology (MoA) features a Coast Salish mountain goat wool blanket that was woven before 1908.

Though the blanket’s creator isn’t known, it was purchased that year at Musqueam Indian Band by a researcher.

The blanket is now in the collection of the Royal B.C. Museum, but was lent to the University of British Columbia for the new MoA exhibit In a Different Light: Reflecting on Northwest Coast Art. 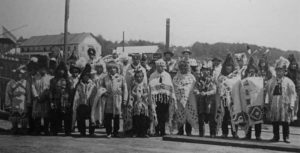 Coast Salish and other Indigenous leaders gather in their regalia at the North Vancouver ferry landing in 1907.

The exhibit showcases pieces from along the coast, with several Coast Salish pieces including baskets, spindle whorls and a carved goat horn bracelet.

Jordan Wilson MoA’s curator in residence from Musqueam, said the exhibit is in response to a separate show of Northwest Coast art that happened exactly 50 years ago at the Vancouver Art Gallery.

“That show was very northern-centric,” he said. “Coast Salish arts has for the most part been overlooked in the study and discourse around Northwest Coast art. We felt it was really important to have a strong Salish presence, particularly Musqueam.”

The wool blanket is a favourite of Wilson’s in the exhibit, and he explained it used to belong to former Musqueam chief Johnny χwəyχwayələq.

The mountain goat wool its made from was considered a status symbol that only certain families wore.

“There’s a subtle diamond pattern that you can see through these coloured bands and the diamonds go beyond the coloured bands into the white wool,” he explained. “That, to me, very clearly includes mountain goat wool.”

Beside the blanket is a photo of Chief Wayne Sparrow wearing a blanket that was woven by his sisters – Wilson’s aunties – Debra and Robyn Sparrow.

“You can see there’s a similar bordering technique,” Wilson pointed out. “Blankets are typically worn by high status people in the community. But they also serve all kinds of purposes in terms of ceremonial functions, and daily functions.”

The exhibit, which aims to show the connection to the works to modern Indigenous people, opened on June 22 and is on display until spring.

Pulling Together: canoe journey wraps on shores of Vancouver