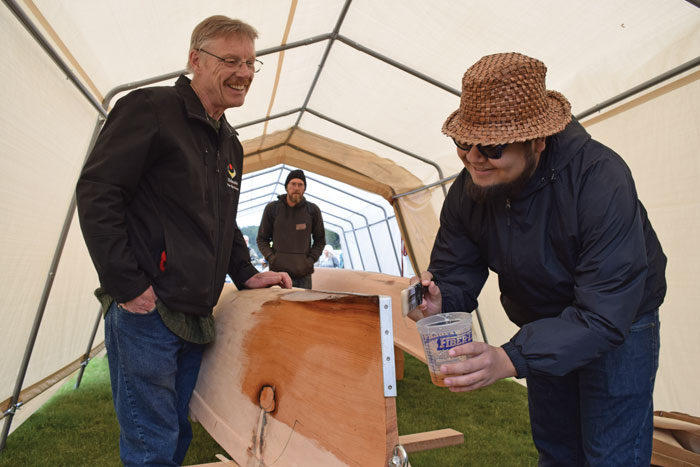 Editor’s note: While covering a canoe painting ceremony at Klah ah men (Lund) for the Salish Sea Sentinel, I was honoured to be called forward as one of several witnesses for the event. Since it is a witness’s job to remember significant events, I’d like to recognize that prior to sharing the story below. Emote.

Two new Tla’amin canoes are ready to take to the water after people from the Indigenous and non-Indigenous communities came together to prime and paint the vessels.

The canoes were built over the past year as part of the Hɛhɛwšin (The Way Forward) initiative.
On May 6, the canoes were brushed with cedar and carried from storage at the Lund Hotel to a tent near the water where Tla’amin Elder Elsie Paul made the first brushstroke of primer to the wood. Afterwards, dozens of other attendees took turns painting. 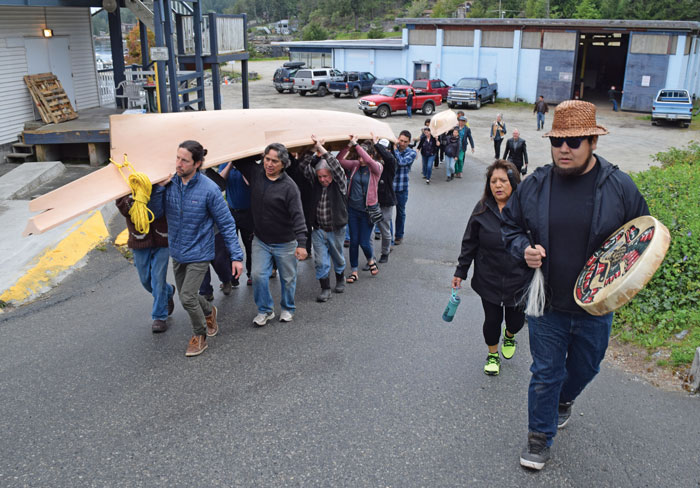 Community members carried the canoes from a storage shed at Tla’amin’s Lund Hotel to a nearby tent to be painted.

The canoes called Hɛhɛwšɩn and ƛičos were carved in a months-long process led by Tla-o-qui-aht carver Joe Martin and involved more than 1,000 schoolchildren and other community members.

Hɛhɛwšɩn is a full-sized vessel that’s centred around reconciliation, and ƛičos (springtime) is a smaller canoe for children and youth.

The canoe hulls have now been painted black, and the Hɛhɛwšɩn canoe is adorned by an eagle design that was created by artist Sherman Pallen.

In the spirit of Hɛhɛwšɩn, Pallen has given the non-Indigenous community permission to paint his design onto the canoe. Lund resident Courtney Cressy, who is also an artist, painted the final piece on.

Pallen said, though he worked meticulously on the piece to get it just right, he left the final design decisions to the painters.

Now that the canoes are finished, Tla’amin member Drew Blaney (Kespahl) said that the summer is going to be a busy one for the new canoes, as they are set to be used in several journeys: Tribal Journeys, Pulling Together and Awaken the Canoes. 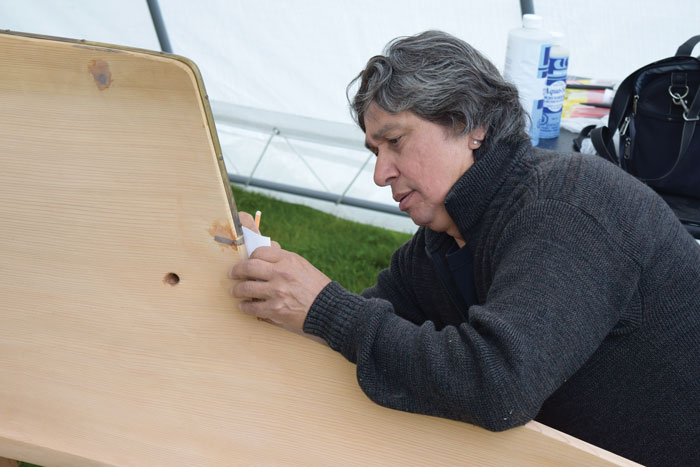 Tla’amin artist Sherman Pallen works on his eagle design for the larger vessel.

“So these canoes are going to be well used this summer,” he said. “I really look forward to seeing them on the water.”

Cyndi Pallen (čɩnɛ)—who started the Hɛhɛwšɩn initiative along with Elder John Louie (Yahum) and Lund resident Phil Russell (k̓ʷʊnanəm)—explained that the ultimate goal of the initiative is to see a better future.

Hɛhɛwšɩn has now formed a committee and will be initiating more reconciliation-centred activities in months to come.

“It’s a gift that we are all together here because at one point, we were never
together,” she said.  “The journey that we’re working towards today is to have our children be represented in a good way in society.”