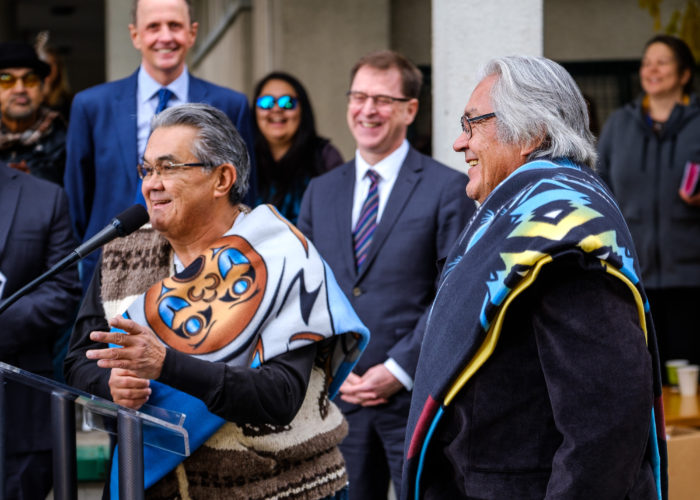 A Coast Salish totem pole that was carved by two brothers from Tsawout First Nation in honour of their late mother has been unveiled in Victoria.

The Crossing Cultures and Healing Pole now stands outside of the B.C. Ministry of Health’s headquarters on Blanshard Street.

The pole was carved by Tom and Perry LaFortune last summer outside of the Royal B.C. Museum, where members of the public were invited to observe the process and ask questions.

The seven-and-a-half metre pole was officially unveiled in late November.

To represent this, the pole features a figure of a woman at the bottom. Above her is an owl, which Tom said is a reminder to “remember the past, live now and push towards a better future.”

On the top of the pole is a raven to pass the messages along, while a rope ties all of the figures together.

The totem was carved as the result of a partnership between the Royal B.C. Museum, the Ministry of Health and the Songhees and Esquimalt Nations. The cedar log used was donated by TimberWest.

Health Minister Adrian Dix said he sees the pole as a symbol and reminder of the ministry’s commitment to cultural safety and understanding.

“Throughout the carving process this summer, there was an excellent learning opportunity for the public to witness First Nations cultural practices,” he said in a statement.

“And we know that this increased understanding of Indigenous culture is a high priority for all levels of government, particularly within the health-care system.”