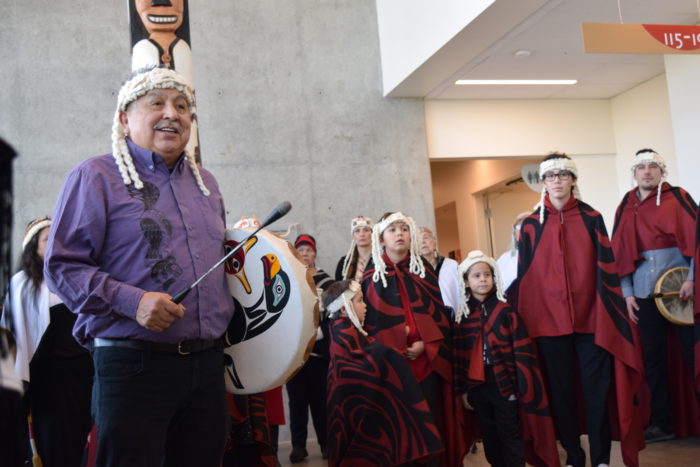 A Snuneymuxw totem representing the beginning of humanity, healing and learning has been unveiled at Vancouver Island University.

The Te’tuxwtun Pole, carved by Elder William Good (Tseskinakhen), now stands in the main hall of VIU’s new Health and Sciences building on its main campus in Nanaimo.

The pole was officially revealed during a ceremony and celebration on Feb. 9.

The event was attended by many of Good’s relatives, members of VIU’s faculty and other members of the public.

Tricia Thomas (Laxelewetstnaat), who is Halalt and Snuneymuxw, spoke on behalf of Good about the different elements of the carving and what they represent.

The pole features Good’s retelling of the story of some of Snuneymuxw’s first people from Te’tuxwtun (Mount Benson) and St’lillup (Departure Bay).

The legend says that after the great flood, two brothers and their parents landed on Te’tuxwtun. The brothers stayed there for a while, and one day saw smoke coming from St’lillup. They hiked to the site and found two sisters staying there, whom the brothers married, representing some of the first Snuneymuxw families stemming from those areas.

The story was chosen in part because VIU is located at the base of Mount Benson.

“This pole represents the beginning of humanity, of healing and of learning,” Thomas explained.

“Culture and art form the core of peoples’ being, and Coast Salish art is a written language. It opens our eyes to historical existence. It tells us who we are.”

The top of the pole features a Supernatural Eagle, a messenger from the heavens who brings healing to the people. Below the eagle is a man — also named Te’tuxwtun — wearing a sw uq’ wa’lh blanket featuring seawolf designs, another symbol of healing.

On the bottom is a frog design which symbolizes luck and good fortune for the students at VIU to succeed in their studies.

Carol Stuart, VIU’s vice-president of academics and provost, said she worked with Snuneymuxw Elders Geraldine and Gary Manson to conceptualize artwork for the new building and other facilities on campus.

“My first lesson was that this art must represent the Snuneymuxw people, this is their unceded land and we want to install something that would represent a welcome from them,” Stuart said.

“The sea wolf, a creature associated with healing and connection to others, became the vision for the art. The seawolf is frequently found in the petroglyphs in this area.”

A call for proposals was put out to several Snuneymuxw artists, she said, and Good was selected to create the pole. Good’s son Joel was also commissioned to create a spindle whorl featuring a seawolf that will be installed in VIU’s new trades building.

After protocol was complete, Good performed a family Frog Song in celebration with a group of about a dozen of his grandchildren and great-grandchildren. He explained that it has been a dream of his to see the young people perform a traditional song.

“I couldn’t accomplish anything without all my family up here who have helped me and earnestly worked,” Good said.

Debbie Good performs with her Snuneymuxw drum group, Footprints of the Wolf.