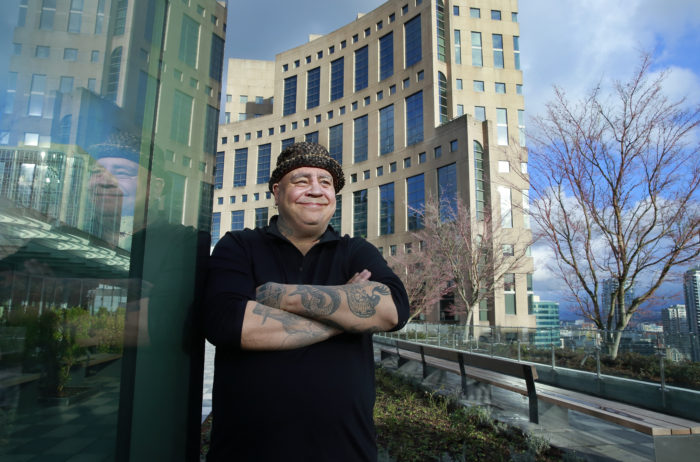 Joseph A. Dandurand of Kwantlen First Nation sits in a circle of chairs at an East Vancouver library, about to read a scene from one of his plays called Please Do Not Touch the Indians.

In the scene, a girl called Sister Coyote goes to a carnival and is both intrigued and horrified to come across a freak show.

Before he begins reading, though, he has one request.

“I have to ask the audience to imagine me as a good-looking 14-year-old Native girl,” says Dandurand, all tattoos and workboots — a fisherman from upriver — with an implied wink.

The audience bursts out laughing.

“So you’re going to have to use your imagination.”
Dandurand was recently named Vancouver Public Library’s Indigenous Storyteller-In-Residence for 2019.

During his four-month stint, the playwright, poet, anthropologist and author is leading various public events at library branches around the city. He is also being given the time and office space to work on his next project, a book of short stories for children.

Dandurand hopes to use the stories at his main role — the director of Kwantlen Nation’s cultural centre — where he often works with groups of kids.

He finishes reading the excerpt from Please Do Not Touch the Indians, where Sister Coyote discovers a two-headed baby behind the curtains of the carnival tent.

“Anyone here ever go to a carnival?,” Dandurand asks.

He addresses his audience like they are all old friends of his, responding to each question with a good-natured verbal jab in the ribs.

“This is quite a jump for me, going from being a real recluse to, ‘Hey, here I am!’” he shares.

“Now I’m like totally exposed. Have you seen my picture in the paper and that? I hate pictures.”

He is humble and a little self-deprecating, but Dandurand has actually accomplished a lot — he’s produced several plays for adults and youth and a radio script, St. Mary’s, that was produced by CBC Radio in 1999.

He has also authored 12 books of poetry, including a new one, SH:LAM (The Doctor), which is set to be released this April.

He studied theatre at the University of Ottawa and worked as a researcher and archeologist for Kwantlen before moving on to manage the Fort Langley-area cultural centre about four years ago.

The centre is part of a cultural resurgence for Kwantlen, which was hit hard by colonization.

Kwantlen people used to number in the thousands on the Fraser River but the population was decimated by the smallpox epidemic, and then again by residential schools.

Dandurand’s mother was five when she was put on a train in Fort Langley and taken to residential school, and joined the Armed Forces when she was 18.

It was there where she met Dandurand’s father.

“I didn’t know she went to residential school for almost 50 years of my life,” he said.

“She never spoke about it. But she was compensated and she’s home now and she actually teaches in schools about her residential school experience.”

Dandurand grew up mostly on military bases, he said, but he always knew he was from Kwantlen and would come home to fish almost every summer.

He was planning to jet off to Mexico one summer about 25 years ago when fate had other plans and his chief at the time offered him a job.

He said he is grateful to do the work he does at the cultural centre, as well as writing, because it’s important to educate people on Kwantlen’s story. It is currently being rewritten by people like Dandurand.

“Our people tell us that we each have a gift. I hope my gift is how stories come to me. They just kind of pop in my head,” he said.

“They say our songs are all floating around and in the air, and (some people) have the gift to hear songs and they’ll come and start singing it … I’m thinking that’s kind of how stories are too.”

Dandurand will be reading poetry and stories in Vancouver during two events on March 20 and 26. Details can be found at www.vpl.ca/storyteller.