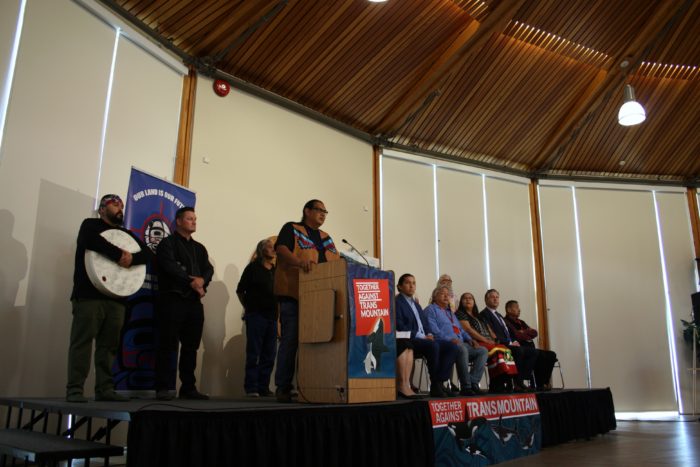 First Nations whose territories cover much of the Trans Mountain pipeline route in B.C. have launched appeals on the recent re-approval of the expansion project.

Leaders from six communities announced on July 9 that they had filed documents at the Federal Court of Appeal to start a judicial review of Canada’s second approval of the project.

An earlier legal challenge resulted in the Federal Court of Appeal quashing the expansion’s first approval by Canada last August, forcing the government to reassess before again approving the project on June 18.

After Canada’s first approval was overturned partially on the basis of a lack of consultation with Indigenous communities, the National Energy Board launched a series of hearings and heard feedback from Tsleil-Waututh and other communities.

But during an announcement on July 9, Tsleil-Waututh Chief Leah George-Wilson said that she felt that process wasn’t genuine.

“It was clear that Canada had already made up their mind,” she said, adding that many of the same mistakes were repeated.

“The federal government has again failed to respond to the concerns we have been raising in regards to this project. This feels like déja vu.”

The nations appealing the project say there are constitutional violations around a failed duty to consult, accommodate and seek consent from First Nations.

They also argue that the pipeline expansion would destroy significant spiritual and historic sites and could cause significant environmental impacts.

“We have no choice but to appeal again and we expect the same results – the approval of the Trans Mountain pipeline will be overturned,” George-Wilson said.