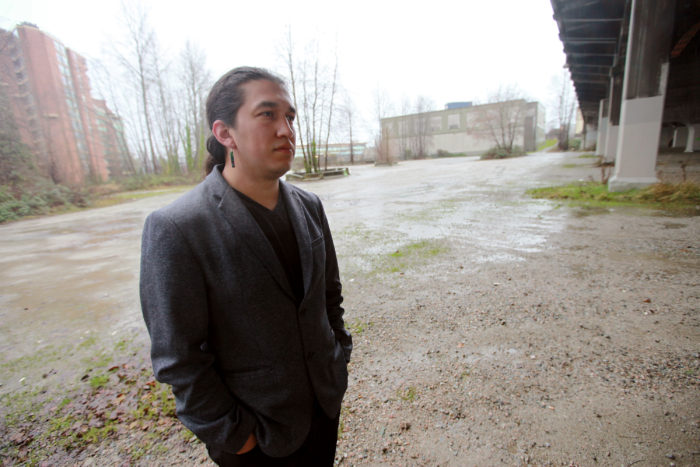 Photo: Sḵwxwú7mesh Coun. Khelsilem stands at the site of the future development.

Sen̓áḵw, one of the Sḵwxwú7mesh Nation’s ancestral village sites, was a seasonal fishing community that was shrunk onto a reserve in the 19th century before the RCMP forced residents onto barges and set its houses on fire in 1913.

But thanks to a multi-billion real estate deal on the site, Sen̓áḵw is again becoming a household word in the Lower Mainland — after nearly nine-in-ten Sḵwxwú7mesh voters gave the green light for the massive 6,000-unit project in downtown Vancouver on Dec. 10.

With the 11-acre project surrounding the Burrard Bridge’s south end starting construction as soon as 2021, Sḵwxwú7mesh leadership says Sen̓áḵw is not merely a strategic money-maker for the nation that could rake in billions over the next century.

A flurry of media attention for what has been dubbed “Indigenized” designs has gone global about the Sen̓áḵw plans, including appearances in U.K. and U.S. papers and what Khelsilem said has been more than 30 media interviews and counting.

The project “represents the single largest development on First Nation lands in Canada,” according to the nation. The Dec. 10 ballot question said it “will create a long-term income stream for the Nation, while capitalizing on Westbank’s expertise in construction and development.”

“It’s inspired by the principles that the Sḵwxwú7mesh Nation really believes in and practices,” Khelsilem said about the design by Revery Architecture — a respected Vancouver firm formerly known as Bing Thom Architects.

“It became a conversation … about Coast Salish design and iconography, but that was just the first design step of many to come, and we will work with our community’s artists to add even more public art opportunities.”

Indigenous-specific features of the design include buildings covered in green plants, smoother edges and few right angles for a typical apartment buildings, and a large amount of recreation space — potentially even a lacrosse course. Renderings also suggest hanging wood canoes incorporated into the design.

While the 56-storey size of its tallest skyscraper — making it the third highest in the city — has rattled some Vancouverites concerned about density, the fact that its 6,000 housing units are planned to be more than two-thirds rental is seen as a lifeline to thousands of residents who have been pushed out of the housing market as prices climbed over the past five years, as renovictions and demolitions soared.

For the estimated 30 per cent of units set aside for homeowners, however, they would not own the title to the land underneath them, but only their condominium unit on a 99-year lease — a long-term arrangement common in Vancouver’s False Creek area known as a “leasehold.”

Asked what other First Nations in the region could learn from the Sḵwxwú7mesh process, Khelsilem advised paying very close attention to communicating, and said documenting throughout the process is key. He said separating out band business from council politics is vital to ensuring such lucrative deals are transparent to members.

The project is being carried out by the nation’s Nch’kay Development Corporation, which decided to partner with Westbank Projects Corp. for the project.

Westbank will keep half of the profits, and the other half go to the nation, who need only contribute land underneath the buildings to what’s estimated to cost at least $3 billion to build. The nation anticipates billions of dollars in revenue from the project — and expects to secure several hundred rental units for its own members, as well as discount pricing on the condos.

In mid-2017, council started the process of assessing the best use of the land, and then issued a call for proposals from interested developers to partner with. Those proposals were then vetted by accountants Ernst and Young, who recommended Westbank. In November, the nation held at least eight information sessions, plus by-request meetings with Sḵwxwú7mesh families.

Some have criticized Westbank and its owner for years of sizeable political donations — until the current B.C. NDP government banned corporate donations outright — as well as profiting off of rampant real estate speculation, vacant investment properties and an influx of billionaires’ offshore cash. On social media, anti-development critics have questioned the project’s high density in a generally low-rise neighbourhood.

“Even over the period of a couple of decades, both sides of False Creek have transformed dramatically,” the project’s website countered, calling Vancouver a “young, evolving” city. “The development of Sen̓áḵw should be viewed through the lens of the Vancouver of 2050, not the Vancouver of 2020.”

The land is estimated to be worth $600 million, according to the nation. Sḵwxwú7mesh would receive payments at every phase of construction, as new occupants move into each building over its 10-year building timeline, and the profits for the 99-year length of each lease.

For one direct descendent of Sen̓áḵw chiefs, the proposed development is “a good thing to help generate revenue for our people,” X̱ats’alanex̱w Siy̓ám̓, also known as Victor Harry, said in an interview.

“It means a lot to me,” he said of the project, “because of all my ancestors that lived there … in Sen̓áḵw, so the legacy of my family comes from there.”

But although the majority of the 827 who voted said yes to the plan, out of 3,000 eligible, some Squamish members have mixed feelings about the development.

T’uy’t’tanat Cease Wyss, a Sḵwxwú7mesh artist and ethnobotanist, is descended from the celebrated chief Xats’alanexw and his wife Swanamia.

She said she “had dreams of the name of that village” when her daughter was born, only later learning the village had been burned to the ground by government decades ago to clear its residents.

She said she felt there was too little time for members to be informed about and question the proposal, and that amidst members’ “mistrust” in how corporations have treated them, partnering with one of the province’s most powerful developers was concerning.

Additionally, she hoped to see much more than just 400 of the 6,000 units set aside for members amidst a housing crisis on-reserve, as well as opportunities for Sḵwxwú7mesh -owned businesses.

“There are lots of things we could have done with that land,” she said.

“I have so many mixed feelings about it. We want it for housing for our people, not just to create a business opportunity … I think they could have found a better way — but it might have taken another 20 years and we are tired of waiting.”

“We tried to explain it as best as we could,” he said, “and hopefully we left people educated enough to make a decision or recommend a decision to those who didn’t know.”

Khelsilem said the project requires only leased land from the nation and doesn’t carry any financial risk for its members. The development is on land that’s owned outright by Sḵwxwú7mesh. It doesn’t need any approval from the City of Vancouver — nor does it need to meet provincial regulations.

But re-designating Sḵwxwú7mesh land did require the blessing of members under Indigenous Services Canada laws.

Just getting the land back from the province was a lengthy process, starting with a major groundbreaking lawsuit in the 1970s, that ended with victory in 2001 and a settlement two years later.

“Our case was ongoing since I was really little,” Khelsilem recalled, standing on the original village site, protected from rain by the bridge above.

“I remember coming here for a celebration after the (court) settlement came through, when we still had a lot of our elders alive who were from here, lived here, and gave testimony in court.”