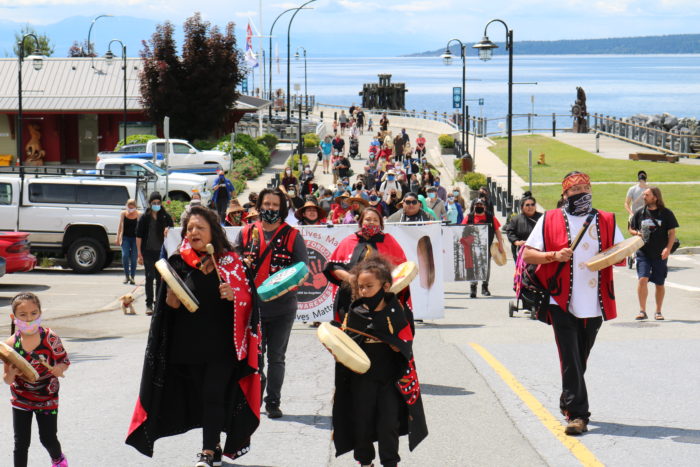 A healing walk was held in Tla’amin territory to honour the memory of a Tla-o-qui-aht woman who was killed by police.

Chantel Moore, 26, was shot by an officer during a wellness check at her home in Edmundston, N.B., in early June.

After the incident, many vigils across the country were held in her memory and as a way to heal and to support Moore’s family and community.

Tla’amin was one of several communities to host a healing walk or circle for Moore and other missing and murdered Indigenous women on June 13.

The walk began at the Powell River ferry terminal and concluded at Willingdon Beach.

Cyndi Pallen (Chennay’), a member of Tla’amin and one of the event’s organizers, said the walk was organized following protocol from the Madawaska Maliseet First Nation in New Brunswick.

“We hold strong to our teachings of our parents, grandparents and ancestors,” Pallen said in a written statement.

“A sacred Cedar Bough Ceremony took place, where the cedar was carried to the river. The water and cedar represented our support, healing and prayers.”

Pallen said she wanted to acknowledge everyone who supported and participated in the healing walk. In particular, she noted Michelle Moir who carried the sacred water with cedar boughs. She also thanked the drummers and singers from Tla’amin and Sḵwx̱wú7mesh, and those who documented the ceremony — Alex Sutcliffe, Phil Russell and Jeremy Williams.

“Especially Michelle Moir who carried the sacred water with cedar boughs, which was brought to the stream and prayers carried out to support Chantal’s family we also acknowledge our drummers and singer of Squamish and Tla’amin and Alex, Phil and Jeremy for documenting this ceremony,” she said.

During the event, all guests were encouraged to wear masks, sanitize their hands and practice social distancing to protect against the spread of COVID-19.

This is the most recent story.