“The revitalization of ocean culture through canoes is coming to life.”

That is Guy Capoeman speaking about Paddle to Quinault, the 2013 version of the annual Tribal Journey. He is the project coordinator for the Journey that will end at his nation, more than 100 kilometers south of Neah Bay on the west coast of the Olympic Peninsula, in late July.

Ocean-going canoes from several Naut’sa mawt Tribal Council nations will join about 100 others that will journey to Quinault Indian Nation this summer.

They will travel from Bella Coola, along the west coast of Vancouver Island and through the Salish Sea. Paddlers from Sliammon, Snuneymuxw and Malahat will join the Journey as it heads south, meeting their relations from Puget Sound in the Strait of Juan de Fuca.

The T’Sou-ke First Nation canoe will cross the strait, landing near Port Angeles for the last legs of the voyage, west to Makah and the open Pacific Ocean, and then south, visiting the tribal communities of Ozette, Quileute, Hoh River and Queets before the final landing at Quinault. 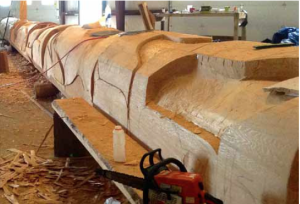 This huge pole was erected at Quinault at the end of the Journey.

Bannock battle on menu for Malahat