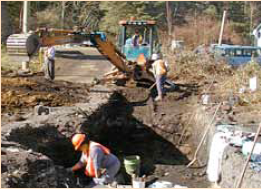 The following article is from the March 2005 edition of Klahowya.

When construction began on Stz’uminus First Nation’s sewage works in 2003, no one realized that history would be in the making.

As excavation began around the site of a pumping station at Shell Beach, the first artifacts began to be uncovered… a stone box, tools made of stone and bone, foundations for posts for ancient longhouses.

As work on the project nears completion several kilometres from Shell Beach at Kulleet Bay, the community is still learning about the discoveries that tell a story of their ancestors from thousands of years ago.

In all, more than 2,000 artifacts have been collected. But more importantly, the remains of over 120 individuals, all identified as aboriginal, are awaiting reburial during a special ceremony scheduled for later this spring.

Archaeologists working for the engineering company who designed the project have carbon-dated some of the findings as being about 5,500 years old. “This is a very big thing for us,” said capital and public works manager George Harris as he gazed into a pipeline excavation in which four or five skeletal remains lie. 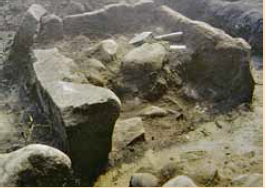 As the archaeological team clears away soil and debris with brushes and hand trowels, nearby community members work as rakers and screeners, checking all excavated soil for bone fragments and artifacts. Heavy machinery and dump trucks idle on the roadside as the work painstakingly progresses. This is not your run-of-the-mill highball construction job. For Lawrence Harris Jr. and Dale Frenchy, their work sifting through the soil has become a treasure hunt of the first order. They anticipate their daily finds and speak excitedly about past discoveries.

A small animal bone fragment of an intricately-carved human face with a tear drop falling from one eye… an intact stone hearth with remnants of fires from before the time of Christ… a green translucent stone shaped into a wedge with its edge still almost chisel sharp… a siltstone carving of a seal… hammers, anvils, bowls, clubs, sinkers, anchors, hooks, harpoons and arrow heads, all tools used daily by ancestors… and decorative items made from the bones of bear, wolf, deer, fish and birds.

Archaeologists discovered much about the ancient Stz’uminus peoples as they catalogued not only the above artifacts, but also the remains of the animals with which they shared their lives… seal and sea lion, whale, vole, beaver, otter, marmot, elk, deer and grey wolf.