‘She’ tells the story of Klahoose 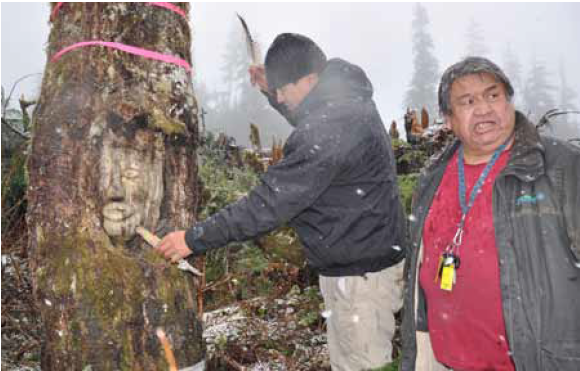 The tree is not a normal CMT, but something known as an arbor glyph, a quite unusual find in the forests of B.C.

The main reason for the trip to Squirrel Cove on Cortes Island during the week before Christmas was to see the Klahoose First Nation sawmill in operation and to talk about the nation’s large-scale forestry work on Cortes and in the traditional territory of the Toba Valley.

But, as so often happens when Naut’sa mawt Tribal Council communities, things got turned on their head. ‘She’ was there. Just about everyone refers to “Her” or “She” when talking about the newest addition to the community. ‘She’ is a chunk of Balsam fir, about 15 feet long, that was helicoptered, trucked and barged from Toba to T’oq (the Klahoose language name for Squirrel Cove) a few weeks earlier.

Forestry work was going on apace in Toba with winter shutdown looming, when ‘She’ was noticed by workers Rob Reynolds and Keith McCrea. They work in the woods for Fireball Contracting owned by Klahoose members Bill Brown and John Reedel.

They spotted a face carved into a tree and immediately knew it was something special. Klahoose forestry manager Kim Olney informed the nation and on Nov. 15, councillor Kathy Francis and a team of professional and cultural leaders made way to Yekwamen (Toba Inlet).

The group made the journey to perform a traditional ceremony for the relocation of the culturally modified tree (CMT) to T’oq. Except that the tree is not a normal CMT, but something known as an arbor glyph (Google that), a quite unusual find in the forests of B.C.

The Klahoose web site said: “Cultural leader Norman Harry Sr. and a Tla’amin cultural leader Erik Blaney witnessed and performed a ceremony to ensure cultural protocol was observed. The heartfelt moments before the tree was harvested was both moving and surreal on that snowy winter Friday. 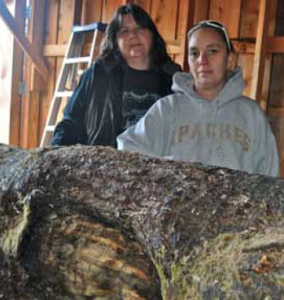 Kathy Francis and Tracy Dimitrov with the tree

Needless to say, the emotional event was a historical moment for those who witnessed.” The sidelong-looking face is carved into a balsam in a stand of trees that had begun growing around perhaps more than 200 years ago.

The carving was done in the late 1800s. Archaeologist Dr. Quentin Mackie –qmackie.com – of the University of Victoria calls such trees “extraordinarily rare” and said: “Now that the Klahoose have created a (web) page for it, we can all see this remarkable find.

It’s really moving to see the face being swallowed by the living centuries of healing lobes.” The location of the tree was about 57 kms from the Toba River estuary. It was removed by helicopter for 30 kms and from there a crane truck carried it to the estuary. From there, it was barged to Squirrel Cove.

It now rests in a specially built shed where it will dry and cure for several months. “The tree is a significant find for the Klahoose and continues to prove our occupation of the land and use of the area.” said Kathy Francis. “We are looking forward to housing the find in our administration building to share with our membership.”

Chief James Delorme credited a number of Klahoose members as well as forestry and helicopter crews who work for the nation in Toba for bringing ‘Her’ to her new home.