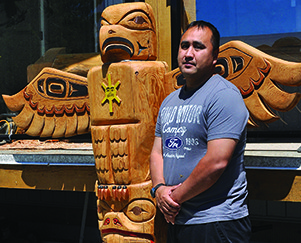 When Craig Galligos of Sliammon was working on the totem for Powell River’s Kathaumixw choral festival last summer, travel plans were in the back of his mind.

That’s because he was going to accompany the pole when it was delivered to the ‘choir of the world’ named during the festival’s closing ceremonies. It could have been awarded to a choir from Kenya, Russia, the USA or even Abbotsford, BC.

The winning choir was from the St. Stanislav Academy from Ljubljana, Slovenia, a country on the north Adriatic Sea bordering Italy and Austria.

Galligos, along with people from Powell River and possibly a Sliammon group, will travel with the pole to Slovenia in May.

Kathaumixw is a Sliammon word, meaning “many nations coming together.” Galligos told The Sentinel last year that his design for the six-and-one-half-foot pole was meant to represent both First Nations and Canadian imagery.

A bronze-eyed beaver gnawing on a piece of wood is carved into the bottom of the pole, while the top is an eagle.