‘How rich we were’ A profile of Iggy George 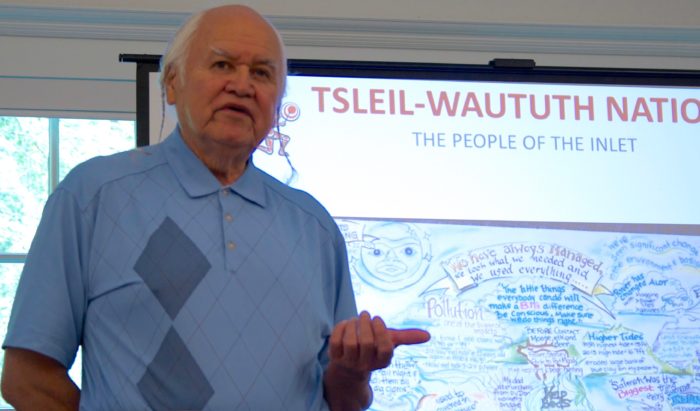 Tsleil-Waututh elder Iggy George was born on the Burrard Inlet in 1940 and has lived there for his entire life.

George talked about his home territory to a group of experts, Indigenous leaders and city officials at a Burrard Inlet Science Symposium in Vancouver’s Stanley Park on May 19.

“I just get emotional, just thinking about our young lives then compared to the young lives of today,” he said. “How vastly different it was.”

When George was a child, he didn’t even have a battery radio, let alone an iPhone.

There also weren’t many ways to get off the reserve, so he and his relatives spent most of their time on the beach.

“Our mother used to just make us breakfast, we’d do our chores and then we were on our own throughout the day, during the summer,” he said.

“We got hungry. We could either dig clams, cook it ourselves or we could catch crabs. But most of the time we took the dugout and we went fishing.”

George said there used to be a massive kelp bed in the inlet where he would catch different kinds of fish that were plentiful in the area. There were numerous other kelp beds around the reserve and they attracted ducks. When George was older, he would hunt those, too.

He chuckled at the memory, but knows the way he grew up cannot be a reality for the generations after him.

George said the kelp beds started disappearing in the 1970s as pollution from industry increased. The ducks and much of the sea life disappeared with the kelp. What was once many hundreds of ducks dwindled to none into the 1980s.

The fish populations also decreased, as did the crabs. And clam beds that once were so fruitful that George and his family would fill up 100-pound sacks, died off, too.

But George regained hope in recent years, when things started to get better, thanks in part to work by the nation and outside experts to restore the inlet.

“Around about 2010, I noticed a flock of ducks,” George said. “There were about 50 of them, going by in front of my house. I live right down on the water. And I got all excited about it, I was telling my wife about it. … It felt so good to see them.”

That number grew to more than 3,000 last year. And the nation’s members will soon be able harvest a clam bed for the first time in many decades.

George said he knows things will never be the same as they once were, but he now has hope that things will get better.

“It’s been such a big change on the inlet,” he said. “I just wish my great grandchildren could see or do what we used to do when we were kids.

“Growing up and looking back, we thought, oh man, we were so poor, we had to do this and do that, but now I look around and I realize how rich we were.” 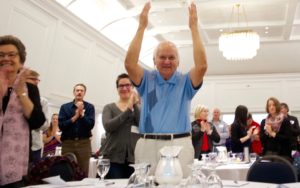 Iggy gives thanks at the symposium

Malahat on new tack as it weathers an LNG storm

Knowledge is key for Kalvin