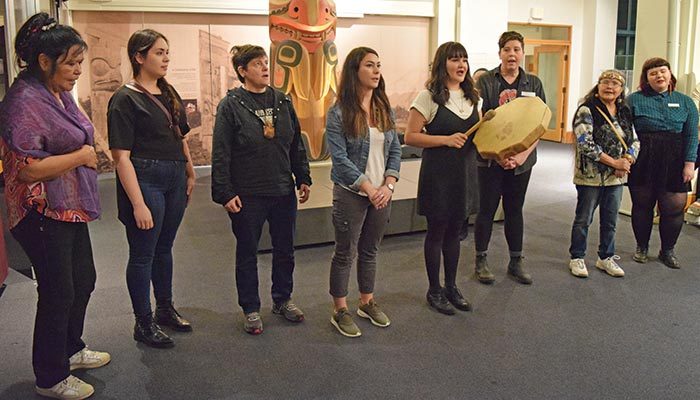 “We have always prepared our children to live in a world that is already on fire,” Billows, who is 26, read to a crowd gathered at Bill Reid Gallery in Vancouver on Jan. 19.

“And if the catastrophe is coming in the morning, how will it be different than waking up on any other day? Yes, there will be a new face on an old system, but the fire and the fight will remain the same.” 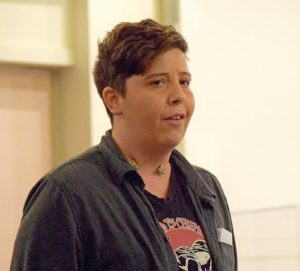 Billows, a member of Homalco First Nation, who has relations in Klahoose and Tla’amin (Sliammon), writes spoken word poetry as a way to connect with people viscerally and to boil down complex ideas into flowing speech.

The poems discuss colonialism and Indigenous identity and many portray both anger and hope.
Billows has a lot to say as a feminist, queer Indigenous person, who is relatively disconnected from Homalco territory.

Adopted as a baby, growing up in Victoria and living in Vancouver since 2011, the poet has found urban connections.

“I’ve found it a lot easier to build community in urban spaces here,” Billows said. “There are a lot of urban Homalco, Klahoose and Sliammon people.

“I shared my poetry (at Tla’amin) once which was really amazing. That kind of relationship building is a little bit less complicated.”

As for most Indigenous people who grew up away from home, learning about Coast Salish culture has been a journey. But a significant factor in self-discovery was studying at the University of British Columbia (UBC) and making ties with a strong community of Indigenous students.

Another strength came from the Idle No More movement, which began in late 2012.

“For me, it came at a really powerful moment, because it was when I was at UBC… and learning from the really amazing Indigenous professors there, and unlearning so many things that I’d learned growing up.”

“It was the first time I’d ever really even seen Indigenous people celebrating being Indigenous at that scale and in such a public arena.”

At the end of university, about three years ago, Billows began to get more deeply into writing and performing poetry, wanting to create “something that could be heard by a broader audience and something people could connect to, rather than writing academic paper after academic paper.

“It just felt like the knowledge I was gaining wasn’t going anywhere. Poetry was a way I could compress a lot of these ideas and these feelings into a few minutes.”

Performing at various community venues, including schools, has also helped Billows connect ideas to an audience beyond academics.

“I can kind of connect to people in ways that I would find harder, and where there would be more resistance than if I just sat down and tried to have a straight intellectual conversation with someone,” Billows said.

“In poetry spaces, even if they don’t agree with what I’m saying, people can connect to the feeling of it.”

Living through this Apocalypse

Today I am writing to you from the edge of the catastrophe.
Words emerge from the heavy air settled deep in my chest
Hollowed sadness.
The tightness of fear.
The doomed weight of inevitability,
of too late, of what now?

But if the catastrophe is coming in the morning.
It is born out of old narratives.
Managed through recycled policies.
I have already lived through this apocalypse, so have you.
For indigenous people, for people of color on this continent,
the catastrophe hit a long time ago.
Today is just another symptom,
the culmination of a system designed
for our exclusion and our extinction

We have already lived through this apocalypse.

In Standing Rock a family is having a conversation about what to do if militarized violence escalates…
even if our only weapons are feathers and prayers.

Somewhere in a living room in America a Muslim family is talking about what to do if the presidential level discussion of mandatory registration turns towards internment camps… making necessary plans.

A latino family is talking about how to avoid a heightened risk of deportation…
don’t open the door.

A Black family is talking about the reality of living under the new Jim Crow, about surviving the next encounter with the police…
keep both hands on the wheel.

We have always prepared our children to live in a world that is already on fire.

And if the catastrophe is coming in the morning how will it be different than waking up on any other day?

Yes, there will be a new face on an old system, but the fire and the fight will remain the same.

From reconciliation to canoes, Canada’s 150th is ‘celebrated’