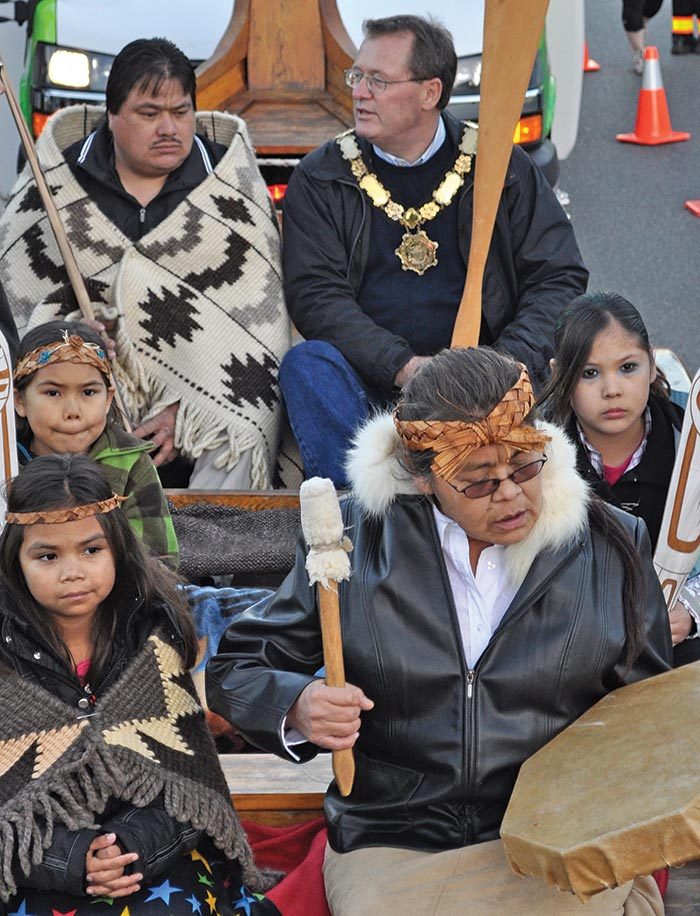 It was standing room only when people from Stz’uminus First Nation and Ladysmith gathered to talk about the future of the town’s waterfront on Feb 1.

The partnership between the First Nation and the town was on display at the speakers’ table. Elder Ray Harris – wearing a paddle vest and cedar hat – was joined by architects and planners for the proposed project. 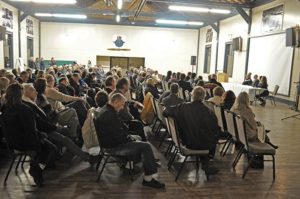 Sitting in the front row of the audience were the councils from Stz’uminus and Ladysmith. The meeting at Agricultural Hall was the latest evidence of a ten-year relationship between leaders of the two communities.

“Aggie Hall… I was here when Roy Orbison was here,” Harris told the crowd of about 200.
“And the next night, my parents brought me to the longhouse. So, that’s what we’re doing now… We are now walking in two worlds. We’re lucky in that sense.

“The opportunities we have are immense… Ladysmith harbour is very important to the Stz’uminus people. We love this place; we cherish it.

“This was our paradise. Year round, the uplands and the ocean provided for us. What more could you ask for?

“We will be a good partner,” Harris told the crowd. 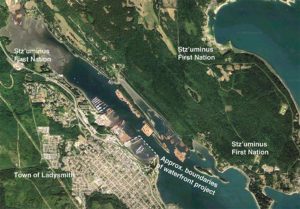 Map of the proposed project.

Development of Ladysmith’s waterfront has been a topic of conversation in the town for more than three decades. Its Transfer Beach Park has become a popular venue for casual and formal activities. In 2016, the Stz’uminus community welcomed everyone to the park for National Aboriginal Day celebrations.

But it is the industrialized area north of the park that has been difficult to manage, let alone develop. Adjacent to the park is Slack Point, made up largely of coal waste materials that reference Ladysmith’s mining days of a century ago.

Next to that is a water lot area known as Dog Patch that is home to a number of live-a-board boats as well as many boats that are abandoned or derelict. Further north is the maritime society’s welcome centre along with moorage for vessels of both residents and visitors.
Farther north, just beside the Western Forest Products sawmill, is the government dock that provides moorage for many commercial fishing trawlers and seiners.

On the uplands are the old railway workshop that now houses the Harbour Heritage Centre, an art gallery and the large, impressive workshop of the heralded carver, John Marston of Stz’uminus.

A large part of the waterfront area, including the water lots and Slack Point, is a brownfield site, thanks to the impacts of past coal and forestry uses. Costs for cleanup, stabilization and dredging could be more than $30 million.

“Industry and pollution have affected our way of life,” Ray Harris told the Aggie Hall gathering.

A decade of accords and other agreements – not to mention the regular meetings between leaders from Stz’uminus and Ladysmith – is largely due to the relationship developed between Chief John Elliott and then-mayor Rob Hutchins.

But the product of those two men’s vision hasn’t just been pleasant formal gatherings to sign documents. Water and sewer service agreements allowed Stz’uminus to begin work on its Oyster Bay development straddling the Trans Canada Highway two kilometers north of the town.

When the town released its 1997 waterfront area plan, there was no mention of the First Nation, let alone any talk of partnerships.

But as the town began publicizing its 2017 version of waterfront planning, a preamble to the process said:

The Stz’uminus, despite their continuing and irrevocable presence since time immemorial, became increasingly alienated from the management of their lands for harvesting, cultural, spiritual and economic use.

This was a result of settler-colonial processes, which divided and sold the land without the input of its original owners and imposed an oppressive reservation and forced residential school system.

Recognizing the legacy of past misdoings, the Stz’uminus First Nation and Town of Ladysmith are committed to working together to restore the cultural values, improve the ecological health and create economic opportunity on the waterfront and in the harbour.

It is not only the town’s leaders who have recognized the value of forming closer ties with the First Nation. As Elliott said at the Feb. 1 meeting: “No matter what comes out of this… we will accept it if it has the best interests of everyone.”

And of the relationship between the two communities, he said: “We need the town and the town needs us… There’s no way around it.”

The councils of Stz’uminus First Nation and the Town of Ladysmith have been meeting together regularly since 2007 to talk about their communities’ shared futures. Since then, they have signed two ‘community accords’ in which they pledged to strengthen their relationship and work together on matters of common interest.

The latest agreement was the  Naut’Sa Mawt Community Accord, which was signed in 2012. It laid out terms for mutual recognition and principles of cooperation, as well as ways to strengthen the relationship and include members from both
communities.

Signs of the times