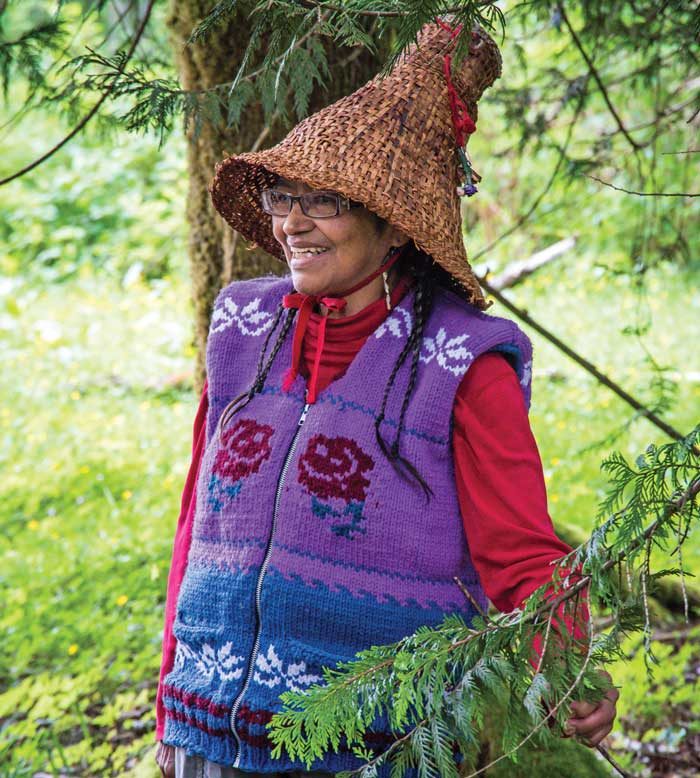 Story and photos by Tricia Thomas

Traditional medicine is being sought after by more people who are choosing not to use pharmaceuticals for maintaining good health. Many of us have developed a reliance on Western medicine; however, we are learning to believe in our own healing ability using natural remedies.

There are countless medicinal plants and herbs growing all around us. Many of these plants are considered weeds nowadays, but they have been used for thousands of years for everything – from shampoo and nail care to treatments for stomach ulcers, diabetes, and even cancer.

On June 9-10, I attended a traditional medicine workshop in Skutz Falls led by Della Rice Sylvester, an Elder from Cowichan Tribes on Vancouver Island. She attributes a lot of her teachings to her grandparents and her Auntie Ellen White, a legendary medicine woman from Snuneymuxw. 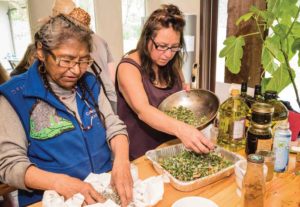 Della preparing sage and Patricia adding the blackberry to the plant mixture for processing.

The first day, we gathered in a yurt where Della welcomed everyone as she handed out guchmein. She sang a song, inviting us to take part, and then showed participants how to clean off any bad energy around the body before explaining the medicinal uses of many different local plants. She shared her knowledge through fascinating stories the same way the Elders had taught her.

One example is her devil’s club story:
“Devil’s club grows in a community. Generally, it is gathered in the winter when the leaves are not growing. Devil’s club is like the king of the castle, It is really, really picky. If it likes you, it likes you – if it doesn’t, it really doesn’t. If you don’t like it, it doesn’t like you.

“Devil’s club is number one treatment for arthritis, all the itis’s, and diabetes; number one because it reboots the immune system… Every day a nurse came to see my uncle Don to check on him and give an insulin shot for diabetes. I said, ‘Uncle, I made you this tea.’ (it was devil’s club) ‘It’s for your diabetes.’ So, I sent him away with a gallon of tea…[and] he went without his insulin shot for six months! Devil’s club stays in the body for six months.”

When it was time to go on a interpretative plant walk, I imagined a long trek into the forest but Della stopped right outside the door and pointed out the little yellow-flowered plant growing next to the yurt. Hypericum perforatum (St.John’s Wort) is used to fight inflammation, nerve damage, depression, PMS and menopause, and even cancer.

Some of the other plants on our walk were burdock, yellow dock, curly dock, Nootka rose, sword fern, comfrey, plantain, snowberry, and licorice fern. Della had a story about the healing power of each plant we came across. For example, licorice fern root can be eaten or used for colds and sore throats, and it thins the blood.

During the second day, participants had an opportunity to harvest medicinal plants and prepare a hair and nail treatment. Della explained the importance of giving thanks and picking medicine with intent, having appreciation and good feelings about what you are doing.

“If you pick medicine with intent, the medicine knows what it’s going to do…when we go to the store, we don’t know where it came from, so you have to re-intention it.”

The workshop was an enlightening introduction into Indigenous methods of healing and it gave us an awareness of Mother Nature’s medicine cabinet. Elders like Della play an important role in our communities by sharing traditional plant knowledge passed down from Elders, as well as cultural teachings about our relationship and responsibility to the land.