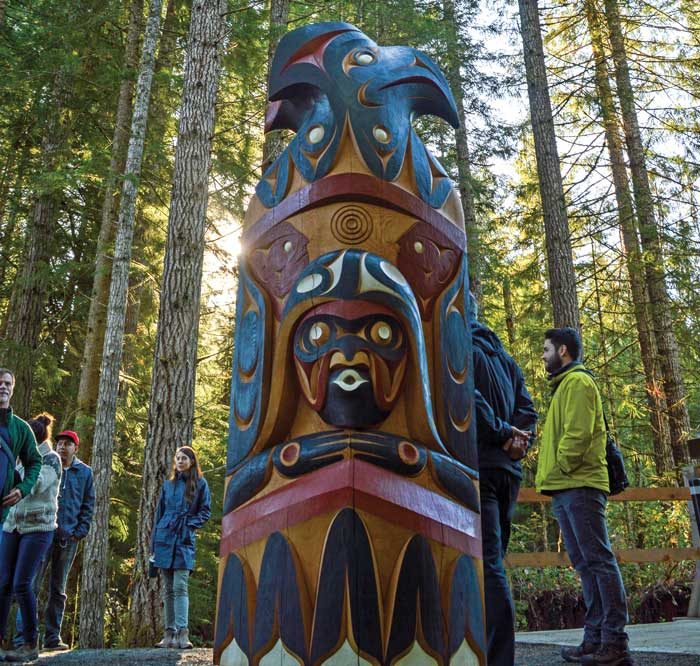 Trail-walkers who are taking in the beauty of Malahat Nation’s territory will now be greeted by a detailed pole that tells stories of the nation.

The “Yos” (Thunderbird) pole has been cemented to mark a section of the Trans Canada Trail that travels along the west side of Malahat Mountain. It was unveiled during an event on Oct. 24.

The project was the result of a partnership between the nation, Cowichan Valley Regional District and School District 79.

Marston explained that carvers worked with elders to create the work.

“They know the land, they know the spirit of the land and they know what it means to their nation,” he said. “Everything on this sculpture is something that is of cultural importance to Malahat Nation.”

Marston explained that the lands are the home of the Thunderbird, and that the mountain was always called “Yos” which is why the pole carries that name, and why the Thunderbird has such significance on the carving.

The front of the pole shows Yos carrying salmon to underline the importance of the salmon run to the Malahat people.

The back of the pole features Sasquatch, who is said to have lived in the mountains, looking down on the people, alongside two children. Legends say Sasquatch kidnapped the two children and they stayed with her in the mountains before they were able to escape by rubbing pitch into the creature’s eyes.

Carrying the representations, at the bottom, is a carving of the Big House, which holds all of the teachings.

North Cowichan Mayor Jon Lefebre attended the pole’s unveiling and gifted the nation with a piece of artwork.

He said he is grateful that now people who walk the trail will get a better sense of Malahat’s territory and stories.

“I am so appreciative of you involving youth in the carving,” Lefebre said. “In my culture, that’s something we need to work on. Involving the youth. And we can learn from your approach.”

The Trans Canada trail is one of the world’s largest connecting networks of trails, and currently stretches more than 18,000 km across the country. When it is completed, it is set to expand to 24,000 km.

This is a corrected story. A previous version wrongly stated that one of the artists who worked on the pole was Luke Marston. In fact it was John Marston. We apologize for the error. 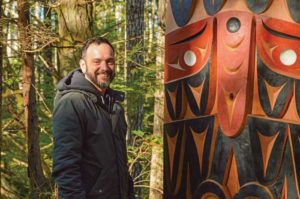 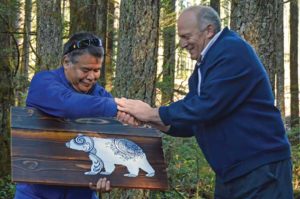 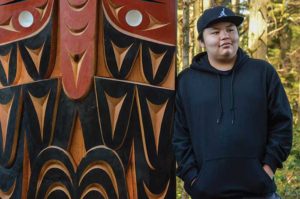 Troy Harry, one of the Malahat youth who helped with the carving, stands with the finished pole.