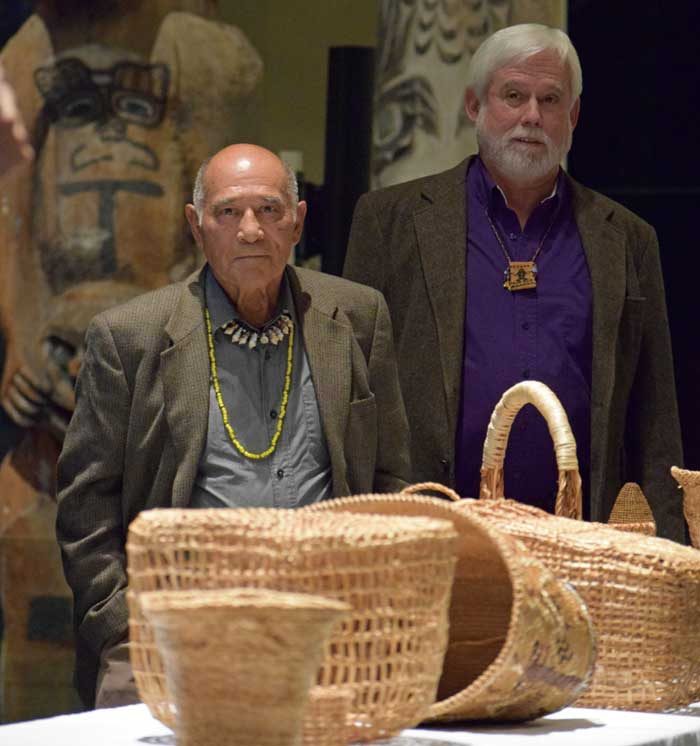 Master Suquamish basket weaver Ed Carriere has released a book sharing his more than 50 years of experience in the craft.

With Croes’s help, Carriere has been able to analyze recovered segments of basket weavings from thousands of years ago and recreate—and revitalize—those styles.

Their book combines their expertise, and talks about the evolution of traditional basketmaking on the Northwest Coast from ancient times until today, and explores their joint research and experience.

Their book had its official release during an event at the Museum of Anthropology in Vancouver on Jan. 18.

During the event, Carriere showcased some of the baskets he has woven before the authors signed copies of the book.

Carriere said he learned to weave from his great grandmother Julia Jacob, who raised him, at the Port Madison Reservation in Indianola, WA.

“I would go out and collect cedar roots for her baskets … and the next day if I’d see them laying out in the yard, I knew they weren’t any good,” Carriere said. “I learned to be choosier.”

Traditionally, he said, men would only weave the bottom of the baskets, “because the bottom never shows,” he laughed.

But when Carriere was 14, he said, he “got brave enough” to weave his own clam basket. Now, after five decades, he is considered a master at the craft.

“That’s one thing about a basket, once you make it, then it has a forever afterlife,” Carriere explained.

Croes said it is “so lucky” that Carriere was raised by his great grandmother so that her weaving techniques could be passed along.

One of Carriere’s baskets is now on display at the Museum of Anthropology’s multipurpose gallery.