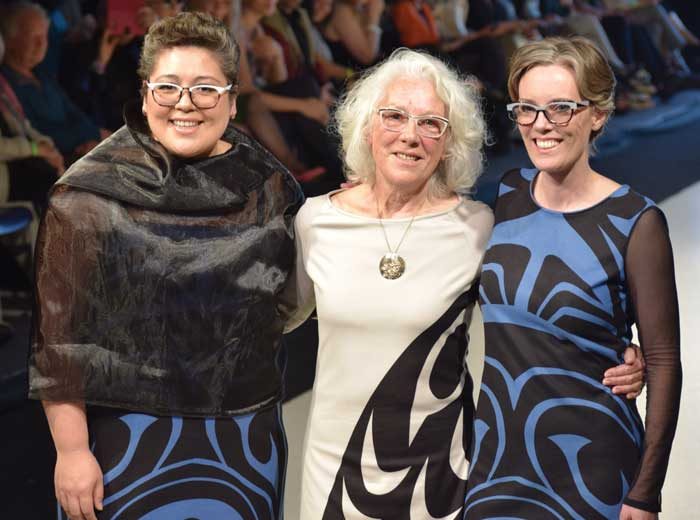 The Snuneymuxw family-run fashion house Ay Lelum showcased their work at Vancouver Fashion Week with a collection that was all about transformation and honouring matriarchs.
Featuring original music and designs, Ay Lelum’s Fall/Winter 18 collection displayed the vast artistic capabilities of sisters Aunalee and Sophia Good and their family.

The collection is titled “Thul Te Lada,” which means “Maker of Beautiful Things.” It’s also the traditional name of the designers’ mother Sandra Moorhouse-Good, gifted to her by her late mother-in-law Hazel Good (Tsum Quat).

The collection heavily featured serpent designs drawn by Aunalee and Sophia’s brother Joel—the serpent represents transformation and power, and is a significant symbol for the Good family.

The show on March 21 opened with a model wearing an oversized coat and a knee-length dress, as the booming soundtrack featuring spoken word and Coast Salish songs began.

The collection of both ready-to-wear and show exclusive designs also featured a mix of dresses, a poncho and a floor-length cape. All of the pieces were wrapped in Coast Salish art.

When the show closed, Aunalee, Sophia and Sandra walked up the runway with hands raised, as the audience cheered them on. The Vancouver Fashion Week showcase is the latest achievement for the growing second-generation design house.

The clothes are designed by the sisters with mentorship from Sandra, who created clothes for her own line called Ay Ay Mut in the 1990s. That line featured art by Sandra’s husband William Good, who has played a key role in revitalizing Coast Salish designs on Vancouver Island. William’s art is now on Ay Lelum’s clothes along with Joel’s.

During an interview at their family home, Sophia spoke about how helping her parents with their artistic collaborations growing up allowed them to more easily start their own design company several years ago.

“We started (helping with) fashion shows really young. And then we put on fashion shows,” she said. “We did it with mom and dad and so the doors were already kind of open because we knew people in the industry.”

The sisters’ clothes, which are manufactured in both Vancouver and at their home at Snuneymuxw, are now sold in about a dozen stores and on BC Ferries. Aunalee said showing their work in fashion week seemed like a logical next step for their company.

“The big part of everything of what we’re doing is we’re recording art, history, music, language,” she said. “We’re trying to record as much as we can. And we have all of those elements in our show, to do with traditional Coast Salish art and culture.”

Sophia, a mother of five, said she feels it’s important to include her kids in the work just as she and her siblings grew up around design.

As she speaks, her baby plays by her feet as the rest of the family sits around the kitchen table, bantering and poking fun at each other and at Joel, who is working on a carving.

“This is just normal,” Aunalee laughs, joking that they should have their own reality show.

The family home, also an art studio, is plastered wall to wall with Coast Salish paintings, blankets, fabrics and carvings.

“We’re all on the same track,” Aunalee said, adding that members of the family will often have the same ideas, and act on them, without talking about it first.

She said that another part of entering Vancouver Fashion week was to show that non-Coast Salish people, and non-Indigenous people, can wear their designs.

The subjects they work with are all non-private and non-ceremonial, so they can be worn by everyone.

“We’re featuring art from a Coast Salish master carver but it’s for everyone,” Aunalee said. “There’s a lot of pride in wearing the art. That’s in the best context of that word. We’re honoured to be able to wear it.”

More information about Ay Lelum and their retailers can be found at www.aylelum.com. 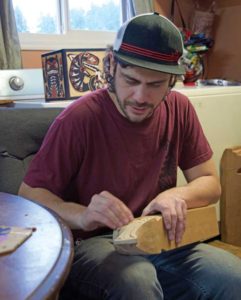 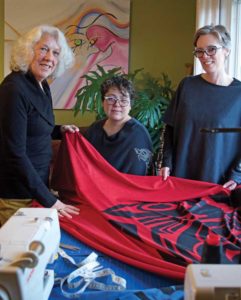 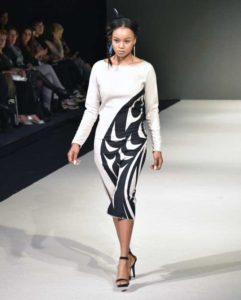 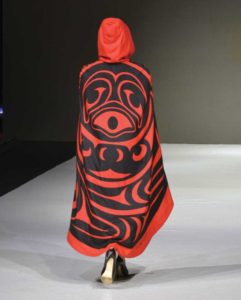