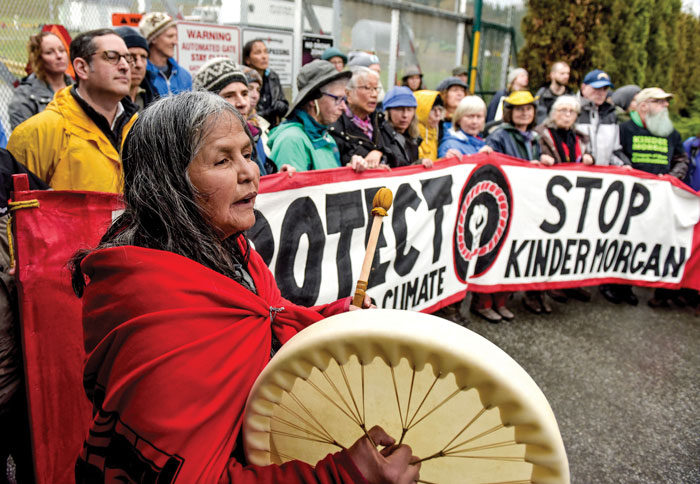 On a rainy day in April, dozens of people are risking arrest by rallying at Kinder Morgan’s facility in Burnaby. While the group waits at the terminal gate for police to arrive, Rose Henry stands by, drumming and singing softly.

Henry, a member of Tla’amin Nation, doesn’t live in the Lower Mainland, but can be seen at many anti-pipeline events in the area supporting Indigenous rights to unceded land.

The experienced activist has fought to balance many social injustices in her lifetime, from opposing damaging fish farms, to being an advocate for the homeless in Victoria where she currently lives.

“As an activist, I am an educator,” Henry said. “I get my motivation from coming together to support various people who are willing to take the risk for direct action.”

Henry has been doing activism work since she was 14 and is still at it four decades later, but she never really planned it that way – the work kept finding her.

In the early 1980s, Henry moved from Powell River to Victoria to attend Camosun College with aims to become a social worker and create a better life for herself and her son Josh.

Henry, who was taken from her home in Tla’amin as a child and adopted out, wanted to help other kids in similar situations. But life had other plans.

“Instead of being the student I became the teacher,” she said. “It took me about 10 years to finally get my Grade 12 and to get the equivalent of first year college, because I’m easily sidetracked. Because I see a lot of injustice.”

In recent years, she battled the Harper government in court over election rules that left out many homeless and poor people by requiring them to present both ID and proof of address in order to vote.

And in 2001, she travelled to South Africa for the World Conference Against Racism where she sat at a table with Nelson Mandela, and met of her heroes Angela Davis.

“I can take my activism both to the streets and into the boardrooms because that’s where the real changes are happening,” Henry said. “Sometimes those decision-makers have a hard time looking at the human spirit because they don’t know what to do with it. They’re used to looking at dollars and figures.”

Henry’s activism is in her DNA, she said, through her birth mother. During the decade she spent in the foster care system, she happened to be placed with a non-Indigenous family that knew about Indigenous issues at the time.

“They made sure we knew our cousins and aunties and knew where they lived,” Henry said. “That was their act of defiance because in the 60s and 70s, we weren’t supposed to know each other.”

Her foster mother would also take her to political parties in Powell River, Henry said, where she would sit at tables with people like former deputy B.C. premier Grace McCarthy.

Over the years, she’s developed a toolbox of skills, and she’s now focused on what she calls “weaving the web.”

“We’re all coming together and I get reenergized to attend gatherings like this one (against Kinder Morgan) and also when I hear young children speaking out,” she said. “We have our senior citizens, our raging grannies, who have been out there as long as I have. Everybody has a responsibility for the disaster (we’re in), but they also have the tools to fix it.”