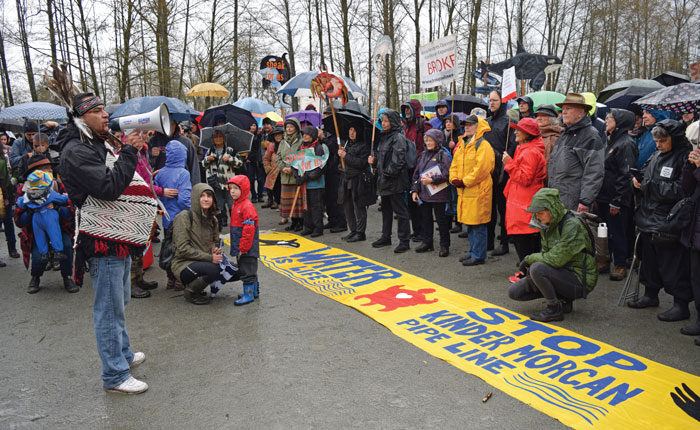 For 18 years, Will George (Swaysən) mostly worked in solitude, washing the windows of highrises for a living.

Now, he’s constantly surrounded by people, he’s in the news almost every day, and he speaks to groups of hundreds of people at a time.

That’s because when it became time for the Tsleil-Waututh member to step up to protect his nation’s territory from the Kinder Morgan pipeline expansion, George did what he had to.

“I got pulled out of the weeds to do this,” he said. “That’s just who I am in my community. That’s just a teaching we have, is do what you’re asked.”

Since March 10, George has been the fulltime guardian of a Coast Salish watch house that looks over Kinder Morgan’s terminal on Burnaby Mountain.

He’s also a leader of the Protect the Inlet resistance movement aimed at stopping the pipeline.

George has been at the watch house almost every day with a small group of other water protectors.

In the few months that George has been there, a lot has happened: hundreds of peaceful protestors have been arrested, thousands of people have rallied at the site, and Kinder Morgan even announced it would suspend non-essential spending on the project.

“We really learned a lot from Standing Rock,” George said during an interview near the watch house. “We keep it small. We don’t have thousands of people. I set the tone here really early.”

George is able to hold down the space and said he doesn’t get tired. He calls the small camp “the heart of the battlefield.”

“The first month we were here it was just solid rain,” he said. “It was really trying at times, it really tested us. But I can’t stand going home. This is where I need to be…This is war, you can’t be getting tired.”

George received his traditional name Swaysən three years ago, which means when he speaks, others will listen. And he’s ready to be heard.

“Hundreds of thousands of people depend on what we’re doing here,” he said. “We’re going to stop this one, and more will follow. I’m very grateful that people are listening.”

More information about the watch house and ongoing resistance efforts can be found at www.protecttheinlet.ca.