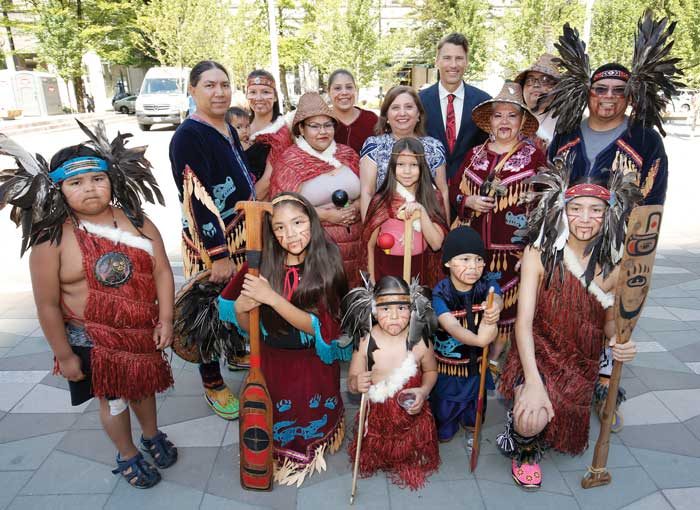 Photo courtesy of City of Vancouver

The new names combine both the hən̓q̓əmin̓əm̓ and Sḵwx̱wú7mesh languages as a way to honour all three nations whose land Vancouver is on.

A committee featuring Musqueam, Tsleil-Waututh and Squamish representatives worked to choose titles for the plazas. City council decided to rename the spaces as part of its larger goal to become a “city of reconciliation.”

“It’s about setting things right but also creating a different future that’s celebrating our diversity and our strength,” he said in a city-created video.

“I think there really is an opportunity for us to be something better than we are right now.”
Gabriel George, Tsleil-Waututh’s language and culture manager, added that it’s important for residents to learn the new names.

“I think it’s important for people to realize that there’s a deep memory here and it goes back thousands of years before there was any skyscrapers or concrete,” he said. “My late grandfather talked about going hunting on the trail that’s called Robson Street today, and hunting for elk not far from (what’s now the Queen Elizabeth Theatre).”

šxʷƛ̓ənəq Xwtl’e7énḵ Square, the new name for the north art gallery plaza, refers to a place where a cultural gathering – such as a wedding, funeral or coming of age ceremony – takes place.

City staff are now working with the three nations on sign designs for each of the plazas, which are expected to be completed by fall.

More information, as well as pronunciation guides for the new plaza names, can be found at https://vancouver.ca/people-programs/city-of-reconciliation.aspx.