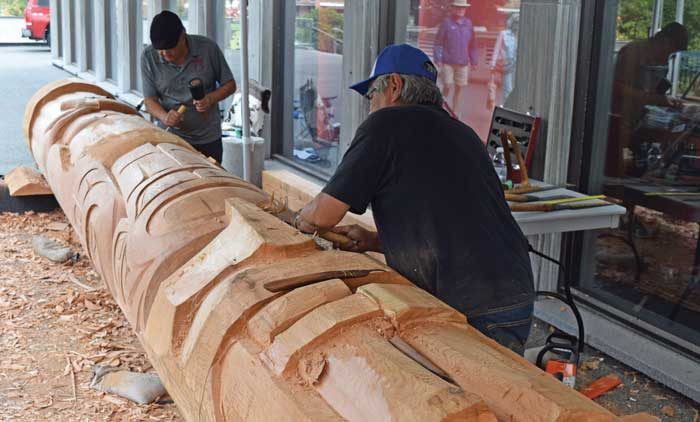 Two brothers from Tsawout First Nation are carving a Coast Salish totem pole in memory of their late mother who survived residential school.

Tom and Perry LaFortune have been working on the seven-and-a-half-metre pole in a tent outside of the Royal B.C. Museum in Victoria since late July.

The Crossing Cultures and Healing pole is part of a partnership between the museum, the B.C. Ministry of Health and TimberWest. The pole is expected to be completed and raised at the health ministry’s headquarters in October.

Tom said he and his brother were initially asked by the ministry to do a “reconciliation” pole but they weren’t comfortable with that term.

“I don’t like that word. There weren’t two wrongs committed, we were just here, so what do we have to reconcile for?” he said. “I said, ‘Why don’t we do a Crossing Cultures and Healing pole?’ The story of this, people can relate to that.”

The pole features a figure of a woman at the bottom that is representative of the carvers’ mother and all mothers affected by the residential school system. Above her is an owl, which Tom said is a reminder to “remember the past, live now and push towards a better future.”

On the top of the pole is a raven to pass the messages along, while a rope ties all of the figures together. 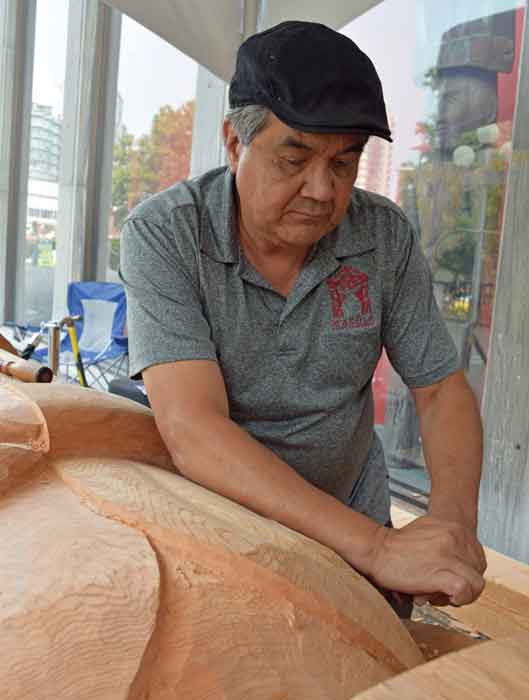 Perry said their mother was part of the residential school system in the 1930s and 40s, and later raised 15 children.

“She taught us so many different values. About hard work, about gathering, about preservation, humility and being honest,” Perry said. “She passed on 10 years ago but she left us with those values and we share those with our children…This is what we do for her.”

Tom said that he and five of his siblings are now carvers. The brothers learned from the late Simon Charlie from Cowichan Tribes, who encouraged them to push the boundaries of Coast Salish art.

“Simon told me when I first started that we are bringing it back, we’re reviving it, that gives us a wide-open door to do whatever we do,” he said. “The art evolves and it’s constantly evolving. I’m not going to do what someone did 300 years ago, I have the tools available to refine my work, so why not push it?”

Both Tom and Perry have been carving since the mid-1970s and have been involved in several other public carving initiatives including the City of Totems project in Duncan. They’ve also travelled around the world doing their art.

“We share … and we hear each other when we make suggestions,” Tom said. “I’ve been carving for 47 years and I learn something with every pole I carve.”

More information about the progress of the pole can be found at rbcm.ca/pole.