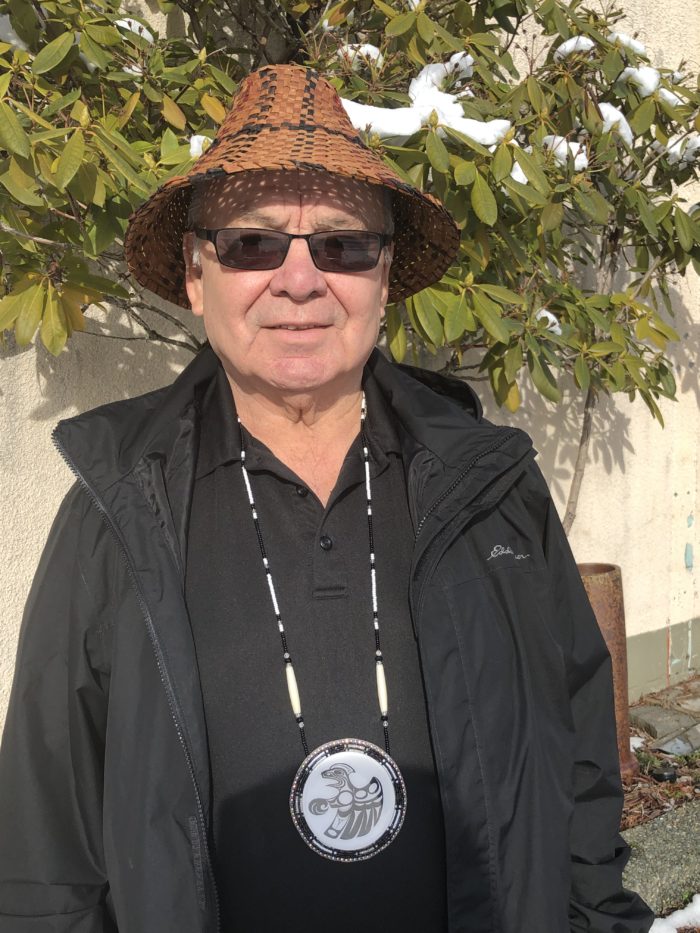 What a pleasure it was to sit with George Harris (Wholwolet’za) of Stz’uminus First Nation and learn about his life. Even though the roads were covered in snow, George had no hesitation braving the weather in order to give me a piece of his day, so that I was able to interview him.

To me this demonstrated how he is always willing to give of himself.

George says he is proud to be Stz’uminus, and Coast Salish, and he is thankful for the teachings of his grandmother.

“Make up your mind to be strong – Q’wam-kwum tsun shqˌwuluwun,” she would say, as well as telling George to follow a traditional way of life. George is passionate about protecting the water, and proudly wears a medallion around his neck that features Eddy Joe’s rendition of the petroglyph in Kulleet Bay, depicting the Protector of Kulleet Bay Harbour.

George said he believes in working with various organizations as it enriches the lives of his people — along with serving on the Elders Council for Naut’sa mawt Tribal Council, he has an impressive list of professional accomplishments.

He has held numerous roles on various councils and committees, including working for Correctional Services Canada on a National Elders Working Group Committee. He previously served as the CAO of the Hul’q’umi’num Treaty Group, as a Stz’uminus Councillor, and was one of the founding members of Tsow-Tun Le Lum Treatment Centre.

It is truly is our honour to have George Harris serve on our Elders Council representing Stz’uminus.

Editor’s note: This web article has been modified.