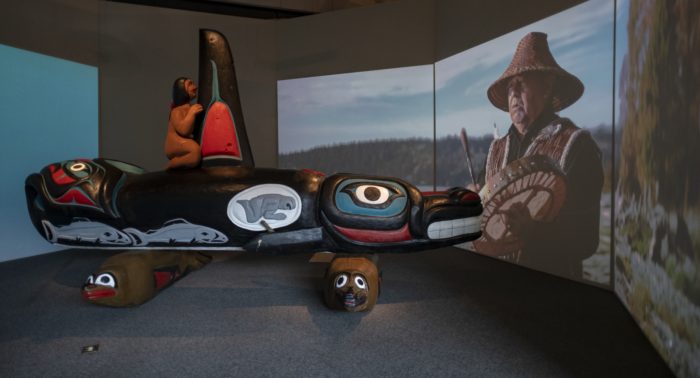 A new museum exhibit in Florida shines a light on endangered killer whales and their cultural importance to Coast Salish people in the Pacific Northwest.

Whale People: Protectors of the Sea opened on Dec. 8 at the Florida Museum of Natural History in Gainesville.

The exhibit is the result of a collaboration with the House of Tears carvers from Lummi Nation in Washington State, who shaped the killer whale totem that’s a centerpiece of the exhibit.

The display is meant to highlight the cultural importance of orca populations that are now critically endangered in the Salish Sea.

In Lummi culture, orcas are their kin, and their word for killer whale — Qw’e lh’ol mechen – translates in English to “the people that live under the sea.”

Lummi House of Tears carver Jewell Praying Wolf James worked on the five-metre-long totem featuring a killer whale and rider that is the main piece in the exhibition.

“It is time for us to accept our inherent responsibility to take care of our home and each other,” James said in a statement.

“I hope the killer whale totem in this exhibition will gather people, intrigue them and make them wonder how they can get involved in the whale’s preservation.”

The Lummi whale rider totem was journeyed down the west coast of the United States in May of 2018 to raise awareness about endangered southern resident killer whales – particularly one Puget Sound orca, Tokitae, who was taken captive from the Pacific Northwest in 1970 and has been at the Seaquarium in Miami ever since.

Lummi has continually sought to return Tokitae (known by the Seaquarium as her performer name “Lolita”) to the Salish Sea in a Washington whale sanctuary where she could be cared for and reintroduced to swim with her family, but the Seaquarium has refused.

The totem was journeyed more than 11,000 km last year before being displayed at the museum. Surrounding the display is large screens of multichannel film featuring underwater footage of orcas in the wild, videos of Indigenous ceremonies and protocol, and interviews with elders.

There are also objects on display from the Florida Museum’s collection, including five smaller poles, two pipes and five platters that feature carvings of whales, humans, eagles and bears.

The museum’s executive director Beka Economopoulos explained that she believes the objects — particularly the Lummi totem – are important to feature as dwindling killer whale populations are threatened by depleted salmon stocks, toxic and sound pollution, as well as fossil fuel expansion.

“The totem’s journey carries a message from the waters of the Northwest Coast to those here on the Gulf Coast,” she said in a statement.

Exhibit developer Tina Choe added that she hopes the exhibit can connect people with information about whale protection to help them make a difference.

Whale People: Protectors of the Sea will be on display at the Florida Museum of Natural History until May 5.