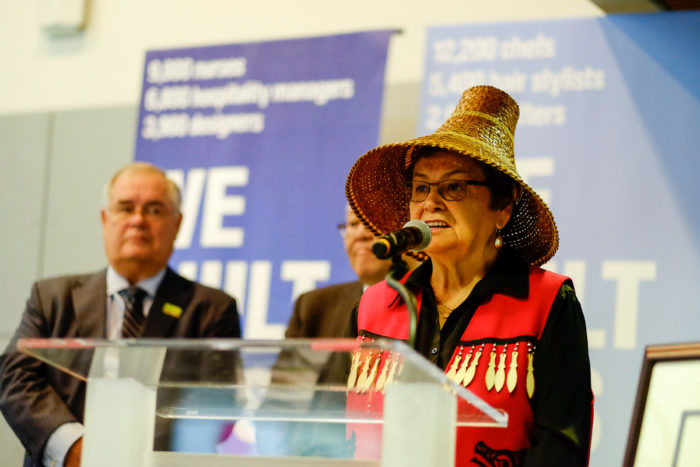 Deanna recently celebrated her 80th birthday. She married into the Tsleil-Waututh nation 61 years ago, and she and her husband Earnest have four children of their own: Carleen, Leah, Earnest and Deanna. They also have 11 grandchildren and 14 great-grandchildren, with the youngest one being just two months old.

Deanna’s first job was at White Spot restaurant where she was a dishwasher. Later, she took on a live-in nanny job and worked in a senior’s home before taking job training to become a social worker for Tsleil-Waututh.  She held that position for 11 years, and later furthered her training to become an addictions worker. Currently, Deanna works as an Elder-in-Residence at the Vancouver Community College.

Volunteering for many organizations, past and present, has also kept Deanna busy.  She was part of a Homemaker’s Club that did fundraising with the United Church, gathering donations of clothing and household needs that were given to Indigenous families up north.  She and her husband are members of the local Catholic church, and fundraise at Christmastime to buy presents for children and elders. She and her husband also sit on an Elders Advisory Committee for Vancouver Coastal Health.

Deanna also serves on Naut’sa mawt Tribal Council’s Elders Council, joining in part because her daughter and namesake, Deanna George, is a director for NmTC.

“I was hearing all that they do, and wanted to be part of the team and be able to have some input for my nation,” the elder Deanna said.

Deanna said if she had advice for others, it would be: “Love yourself and know who you are.  Have a dream and go for it, and work hard for it as well.”

Thank you Deanna for all that you do.