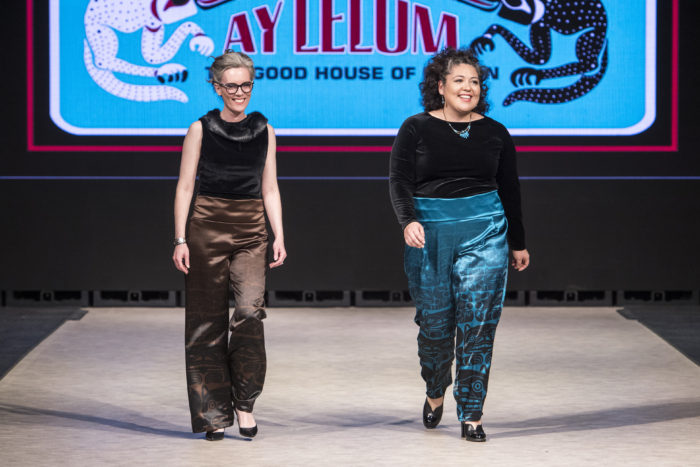 The Snuneymuxw-sister owned fashion house Ay Lelum has debuted its third collection to hit the runway at Vancouver Fashion Week, with clothing inspired by the power of the grizzly bear.

Good tells of the first grizzly bear, who lived in a cedar tree and came down to walk the earth with ground-shaking ferocity — but despite his fierce presence, K’wuyucun was gentle.

Designers Aunalee Boyd-Good and Sophia Seward-Good depicted the legend on clothing using artwork by both their father and brother Joel.

“The traditional Coast Salish style is a visual written language, so whenever (our dad) creates a piece there is a story to it, because it reads as a story,” said Boyd-Good.

“So because we knew the story and we knew the artwork that went with [it], that inspired us to create a collection about it — to make an experience for the audience at the show.”

Opening to raucous applause on March 22 at Vancouver Fashion Week’s F/W19 showcase, a recording of the Elder Good’s voice singing could be heard booming through the venue.

While the mix that the family created with Nanaimo’s Rob the Viking began, a grizzly video played behind the runway that was created by Salish Eye Productions.

As Seward-Good’s voice came on the speakers speaking Hul’qumi’num, the first garment came out to the runway: a shimmering green couture dress featuring details of an early 1940s painting by the sisters’ great-grandfather Herbert Moorhouse alongside Joel’s artwork.

Boyd-Good said the collection was a nod the power of men in their family, and to their mixed heritage, which was underlined by including the artwork from their mother’s grandfather.

The sisters come from a line of artists, including their mother Sandra Moorhouse-Good who had a successful clothing line Ay Ay Mut in the 1990s, and has been their design mentor.

Their father has been a key culture-keeper in Snuneymuxw, bringing back traditional arts and songs to the community in a time when it was in danger of disappearing.

Seward-Good said she feels honoured to have shown at Vancouver Fashion Week for a third time, because it’s another opportunity to showcase modern Coast Salish culture.

“It’s more than just an ancient form of art that’s in museums,” Seward-Good said. “Because the music coincides with the designs, you’re getting language, history.”

Selections from Ay Lelum’s newest and prior seasons can be found online at www.aylelum.com.