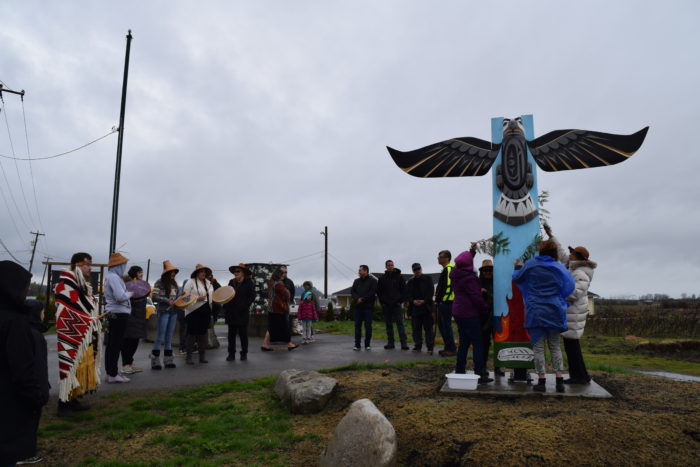 Photo: Tsawwassen unveiled five new posts on the corners of its treaty land base.

Tsawwassen Nation celebrated the milestone 10-year anniversary of its treaty effective date with a day of ceremony and celebrations on April 3.

The nation officially unveiled five new territorial marker poles at the corners of its land base before hosting a gathering in its longhouse.

The posts were carved by Cliff Gurniak, Karl Morgan and Bryce Williams with help from youth apprentices.

On the morning of April 3, community members and guests took two buses around the nation for the unveiling of the five poles, each dispersed on different corners of the land. Witnesses were called and group of Tsawwassen women — Valerie Cross-Blackett, Loretta Williams, Laura Cassidy and Shirley Larden — brushed each post with cedar boughs.

That evening, hundreds of people from the various nations and organizations joined the nation in its longhouse to mark the momentous day with songs, speeches and a feast.

Then-chief Bryce Williams said a new era for Tsawwassen began when the final agreement with B.C. and Canada came into effect under his predecessor Kim Baird in 2009.

“Today Tsawwassen members celebrate the restoration of our way of life under the treaty,” Williams said.

“The first decade of self-government gives us reason to believe there is a bright future ahead of us.”

Under its modern treaty, Tsawwassen has become completely self-governing, reclaiming ownership to 724 hectares of land.

The nation has invested in new infrastructure including thousands of homes, free post-secondary education for members and efforts to revitalize culture and language.

The nation is now an economic force in Metro Vancouver thanks to its investments in business that have included the high-profile openings of the Tsawwassen Mills and Tsawwassen Commons shopping centres.

The nation also has several industrial investments, including a new massive industrial business park, and Amazon is currently building a shipping warehouse on TFN lands.

Doug Caul, B.C.’s deputy minister of Indigenous Relations and Reconciliation, shared with Tsawwassen Nation that its flag was hanging in the provincial parliament building to mark the treaty anniversary.

“That flag is an affirmation of that strong relationship between us, and a symbol of the journey we will continue to take together under this treaty relationship,” Caul said.

“You’ve made incredible progress under the treaty and have such a strong track record of economic, social and cultural success.”

Marc Miller, the Parliamentary Secretary to the Minister of Crown-Indigenous Relations, also attended the event on behalf of Canada.

He said the Tsawwassen treaty is a “remarkable agreement,” being the second modern treaty in B.C.’s history, and the first in a major urban centre. It was the first treaty to be reached under the B.C. Treaty Process.

“It evoked hope for a new way forward.”

A group from Tla’amin Nation also attended the event, and Hegus Clint Williams said that Tsawwassen’s accomplishments under its treaty have inspired his nation to do the same.

“(A group of us) attended the effective date celebration of the Tsawwassen treaty 10 years ago,” he said.

“We hid up there in the corner, away from the microphone and the lights and just took it in, as we were still negotiating then.”

After dinner, Tsawwassen’s 2016 to 2019 executive council and legislature was recognized in the longhouse. Tsawwassen’s government underwent a change just two days after the treaty celebration, when the community elected Ken Baird as its new chief.

Bryce Williams served as chief since 2012, and Baird will be the third chief of Tsawwassen to serve during its post-treaty era.