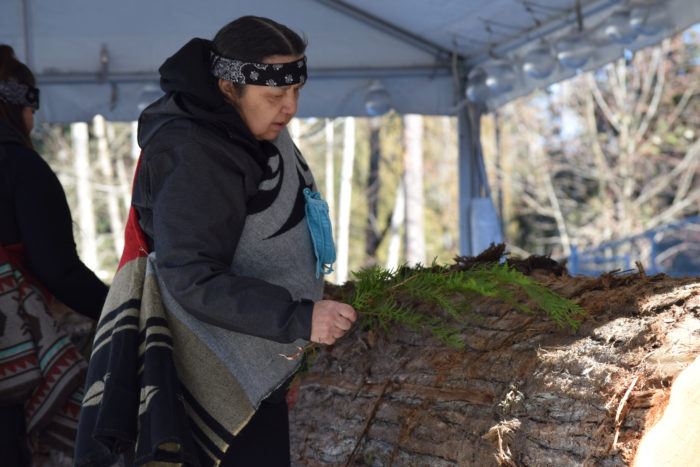 Photo: Ann Whonnack brushes the log with cedar during a ceremony at CapU on Feb. 25.

A classical Salish-style canoe is being carved at Capilano University after a blessing ceremony that prepared the log for its transformation.

It is being shaped on CapU’s North Vancouver campus to commemorate the school’s 50th anniversary.

The cedar log being utilized is estimated to be 400 to 600 years old, and was prepared on Feb. 25 with an awakening ceremony.

Swowo Gabriel of Squamish Nation explained that the former tree saw many generations of people come and go, and had to be prepared for the next step in its life.

“(The carvers) are going to be bringing this canoe into life as a new being,” Gabriel said.

“The ceremony today is to help get it ready.”

It will be the 34th canoe carved by Ses Siyam, who comes from seven generations of canoe carvers.

“That was our family profession before [European] contact,” he said in a statement.

“I thought this legacy project was a good opportunity to help document this canoe-carving culture.”

Both Ses Siyam and X̱ats’alanexw Siyam are hereditary chiefs and have now carved eight canoes together.

Ses Siyam said he hopes the process will be fairly interactive, as students and the public are being invited to stop by and observe the process as the traditional canoe takes shape.

Students in the university’s Indigenous Independent Filmmaking Program are also filming a documentary about the carving process.

“It’s one of my favourite (types of) canoes to carve because it’s the most unique and intricate.”

CapU Elder-in-Residence Ernie George of Tsleil-Waututh Nation has also been involved in conceptualizing the project, as he is a former canoe racer.

“There are many canoe builders in our family tree too,” George said.

“I know our ancestors are here and I know they’ll be watching over them.”

“Ses Siyam is keen to share cultural teachings with the community as he carves,” he said in a statement.

“His contributions to Indigenizing our university will be invaluable.”

The canoe will be housed at CapU and taken out on the water during the summer.

The carving has already begun in an open lot next to the Bosa Building. It is expected to be completed later this Spring.

More information and updates can be found at capilaou.ca/50.