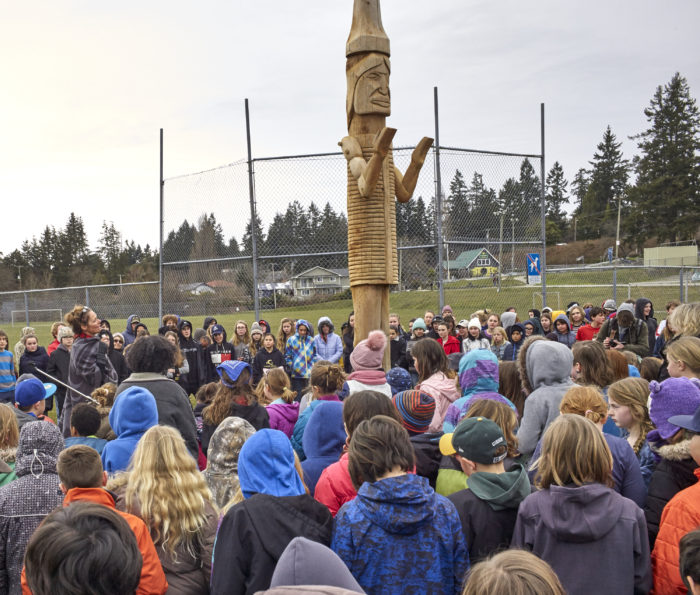 Photos by John Cameron via SD64

The unveiling of a Coast Salish welcome figure marks the beginning of an increased understanding of Indigenous culture on B.C.’s Southern Gulf Islands.

The figure on Salt Spring Island represents hundreds of hours of combined work by students and local residents, and it now sits outside of the School District 64 office.

It was commissioned by the Southern Gulf Islands district — which spans various Coast Salish territories — as a way to educate children on local Indigenous culture.

The welcome figure was shaped slowly over three years in a process led by local Interior Salish artist and SD64 employee Quentin Harris.

SD64 Indigenous education coordinator Shannon Johnston said officials didn’t want to rush to work, as they wanted to ensure that as many children as possible from surrounding Gulf Islands had a chance to work with Harris.

Harris hosted weekly carving sessions in a tent outside of the middle school on Salt Spring.

“We had him come every week for a number of years,” Johnston said in a phone interview.

On March 6, the figure was finally unveiled during a large ceremony attended by hundreds of people, many of whom travelled from the surrounding Gulf Islands.

During the ceremony, Cowichan Elder Fred George brushed the figure with cedar and witnesses were called to remember the day. Harris was also blanketed to honour him for his work.

Johnston said it was a momentous day for the district, as it’s the first welcome figure that has been commissioned and the work will now likely expand to other schools on other islands.

“I love that we’re seeing education beyond a piece of paper,” she said.

“The art is a story, the ceremony is deep teaching and (students are) learning from the land and on the land.”