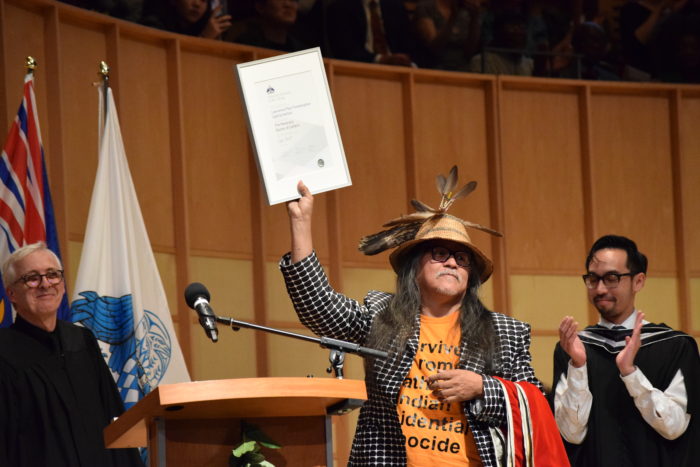 Vancouver-based artist Lawrence Paul Yuxweluptun Lets’lo:tseltun made a call to abolish the Indian Act while he was receiving an honorary degree on May 4.

The contemporary Okanagan and Coast Salish painter received an Honorary Doctor of Letters from Emily Carr University during its convocation ceremony, being lauded as a “unique and persistent voice for change.”

Yuxweluptun graduated from Emily Carr in 1983 with an honours degree in painting — his work combines surrealism with Northwest Coast and Salish styles, using bright colours and ovoid forms to express the harsh realities of colonization.

His work has been displayed internationally, in the National Gallery of Canada, and in 2016, a retrospective exhibit of his work called Unceded Territories was shown at the Museum of Anthropology.

After receiving the award from Emily Carr, Yuxweluptun used his platform to ask the hundreds of people in the audience — graduates, university staff and family members — to please work on quashing the federal Indian Act.

“Talk to your representatives. Ask for a referendum to get rid of the Indian Act. We’re tired of being prisoners,” he said.

“I want all Native people to have equality and freedom. Real freedom to be recognized as human beings … We can all work together to change the things that are necessary for this world.”

Yuxweluptun finished his speech to a standing ovation from the crowd. He said his art has always been about documenting history and pointing out injustices.

In the late 1990s, Yuxweluptun did a performance art piece called An Indian Shooting the Indian Act, where he used a rifle to shoot holes in a copy of the federal document. The Indian Act was first passed by Parliament in 1876 and has established laws around Indigenous people in Canada including the reservation system, the residential school system as well as creating rules around who receives Indian Status.
“It’s an outdated system,” he said.

“We need self-determination, self-governance, self-rule, so we can protect ourselves and engage in this country properly as human beings.”

His father, from the Cowichan Nation, was involved in the Union of B.C. Indian Chiefs and National Indian Brotherhood, and trained him from a young age to fight for his rights.

“At age 14, (Lawrence) explained his right to fish for food to an officer who wanted to ticket him,” Siddall said when introducing Yuxweluptun.

“When the officer threatened to arrest him, he explained how arresting a child would look on the six o’clock news. He didn’t get the ticket.”
Siddall said that ability to shift a viewer’s perspective is now typical of Yuxweluptun’s art.

“His paintings confront us with important issues such as colonialism, residential school, and the destruction of the environment,” she said.

Siddall presented the artist with the honorary degree “for his artistic creations, activism and unique and persistent voice for change.”

contributions to the fields of contemporary art and design made by these three individuals as dynamic artists, innovative designers, and compelling advocates,” Siddall said in a statement.

“As provocative leaders in their respective fields, (they) embody the spirit and purpose of Emily Carr University — making a bold and lasting impact on creative practice and cultural engagement, thereby inspiring and informing the facilitation of future thought leaders and change makers.”