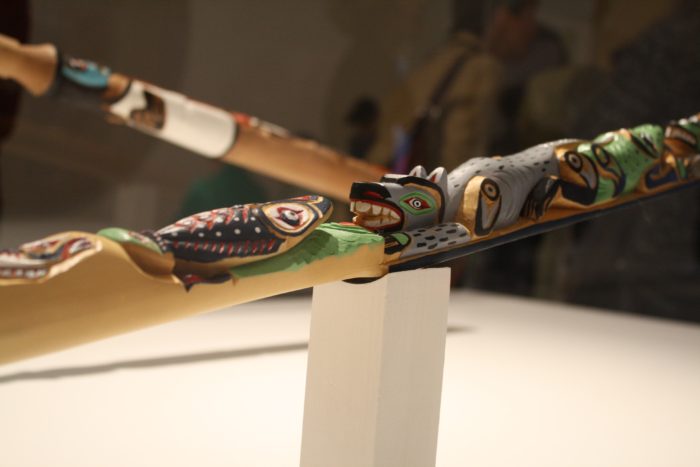 For curator Jesse Birch, inspiration for Nanaimo Art Gallery’s latest exhibit came to him as he watched father and son artists Joel and William Good (Tseskinakhen) carve at their kitchen table together.

Their home on the Nanaimo River in Snuneymuxw territory also serves as a family work space, and as he watched the wood chips fall, Birch began to envision an entire gallery show focused on intergenerational art.

The show titled Across the Table launched on April 25 with singing, drumming and dancing from three generations of the Good family.

The exhibit features carvings by both Joel and William as well as multimedia pieces from artists Guy Ben-Ner, Justine A. Chambers, and Tanya Lukin Linklater.

“(The exhibit) is just really about the spirit of collaborating across generations, and how different artists from different cultural backgrounds work through that in different ways,” Birch said.

Most of the Goods’ pieces were sourced from private collections, but one in particular — a talking stick — was created specifically for the exhibit, said Birch.

Recently, when a group of curators were visiting from Vancouver and Japan, Birch was asked which artists were on his “must-see” list. He replied that, of course, they had to visit the Good family.

“While we were there, William showed us [his] long talking stick with all the different animals on it, and explained that it was the first piece he and Joel carved together,” said Birch.

“It’s a record of their family’s stories, it’s a really important document.”

Inspired, Birch asked William and Joel if they would consider carving another talking stick for the exhibit — one that represented where they are at now — and the artists agreed.

At the opening, William pointed to where both sticks were now encased in glass at the centre of the room.

“What you do, you see, is that you carve one half and then you let your student carve the other half,” said William, who added that the first one was completed with Joel in the late 1990s.

William said the other one features the eagle, which is the main family crest and protector.

“It’s a messenger between heaven and earth and when we pass away, it’s a supernatural eagle that brings us to heaven,” he said.

The supernatural eagle features strongly in their family’s work, and is also included on a permanent piece by Joel and William, Supernatural Eagle Bringing the Sun Back to the World, that fronts the gallery facade outside.

A tool traditionally used by Coast Salish people to spin wool, the spindle whorl has become an important symbol for Snuneymuxw and other Coast Salish communities.

One spindle whorl by Joel, Supernatural Eagle Carrying the Grey Whale, is a recreation of an ancient design.

Joel said that he originally found the design in an old photo of Coast Salish spindle whorls.

“I hadn’t really learned Coast Salish [style] up to that point,” he said.

“So I had no idea what I was looking at. And [my dad] came in right at that moment and said, ‘Oh you have the old sul’sul’tuns,’ and it turned out that it was our artwork.”
Good said that was the start for him in recreating more historical Snuneymuxw pieces, and the style eventually flowed well enough for him to create his own works.

Also on display are William’s D-adze carving tools which he’s used for many carvings, which Birch said were chosen because they are themselves works of art.

“I love that they are these objects of work but they are also telling their own stories as the labour is happening,” said Birch.

Other pieces featured in the exhibit include a digital video by Alutiq artist and performer Tanya Lukin Linklater called The treaty is in the body, and Israeli artist Guy Ben-Ner’s film Moby Dick, which was made in collaboration with his children.
Across the Table will be on display at the gallery until June 30.