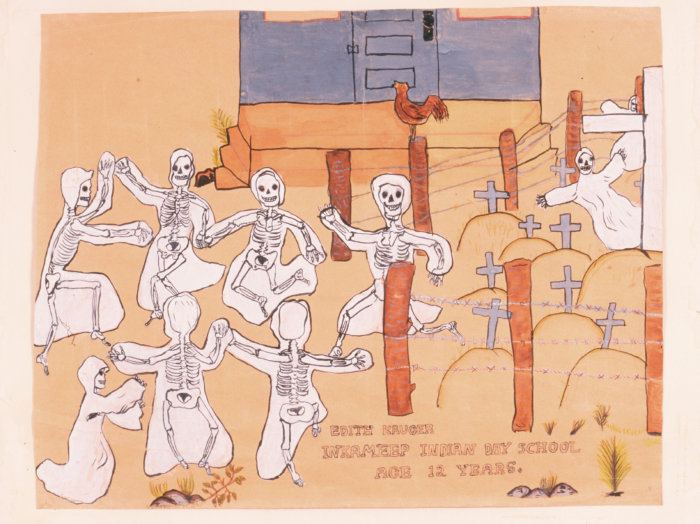 An exhibit of artwork done by Indigenous children while in Canadian residential and day schools showcases an important record of culture and history.

The exhibition called There is Truth Here at the Museum of Vancouver displays rare surviving art pieces created by children from four institutions between the 1930s and 1970s.

There is Truth Here was curated by Andrea Walsh, an anthropology professor at the University of Victoria, and was brought to Vancouver after originally being displayed at the Legacy Art Gallery in Victoria.

MOV’s Indigenous curator Sharon Fortney led the process of bringing the works to Vancouver, and selected additional works from the museum’s collection to add to the display.

Walsh said the idea for the exhibit was formed when UVic received a gift of more than 700 paintings that were done by Indigenous children across Canada, but the university didn’t feel right about keeping their property.

“Since 2008 we’ve been trying to locate survivors to repatriate their work,” Walsh said.

That project led Walsh to meeting residential school survivors and their families, some of whom attended an opening reception for the exhibition on April 5.

Taylor Baptiste of Osoyoos Indian Band spoke about meeting Walsh and discovering artwork from her grandfather Francis, who attended the Inkameep Day School in the 1940s.

Baptiste never met her grandfather, who passed away before she was born, but she has known Andrea since she was just five years old.

“As I got older I really started to appreciate all the hard work she’s done for my family, for the Osoyoos Indian Band and all the other families who are represented here,” Baptiste said.

“As I got older I tried to recreate his work,” said Baptiste, who is now an artist herself.

“That’s why I started painting.”

The works in There is Truth Here include paintings, drawings, sewing, beading, and even multimedia pieces showing performances, drumming and singing.

Walsh said the works on display were created by children ages six to 18.

“The artworks in this exhibition form an official record of their creativity and their resilience from what was all too often a daily struggle to survive,” Walsh said.

“Each piece of art, whether signed or not, bears the mark of an individual child’s thinking and actions. They did not create their art as a record of history for Canada, but that it has become.”

For the exhibit, MOV partnered with the Capture Photography Festival to produce a local response to the works. Roxanne Charles, an artist from Semiahmoo First Nation, drew inspiration from archival photographs of life at the St. Mary’s Residential School in Mission, B.C., to create a response piece that includes a space for prayer.

Those photos form a conversation with the artwork displayed in the next room, Walsh explained.

“These pictures are often of children in uniforms, and they are anonymous,” she said in a statement.

“What the art does is highlight that all the children in those pictures were wonderful little children … There is a creativity to these pieces and there is a resilience to them.”

There is Truth Here opened in April, and is on display until January 2020.