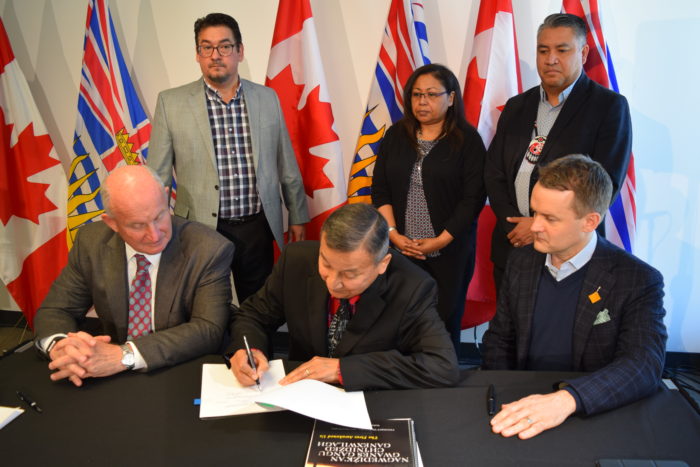 In the face of worsening B.C. wildfires, Indigenous and government leaders have signed an agreement committing to improve emergency management for First Nations.

The Memorandum of Understanding was signed April 27 by representatives from the B.C. and federal governments as well as the Union of B.C. Indian Chiefs, the Assembly of First Nations and the First Nations Summit.

The agreement represents a formal partnership to better support First Nations’ capacity to respond to — and recover from — emergencies such as wildfires, landslides and floods.

BCAFN Regional Chief Terry Teegee said the past two years have been the worst in recorded history for wildfires, with that trend expected to continue in 2019.

“Eighty-five per cent of our communities are in rural areas, and the first effects of climate change are felt by First Nations people,” Teegee said.

“What I see is a common thread of our First Nations people being under-resourced.”
Teegee said that as a result of the new agreement, he hopes to see more emergency management resources allotted to First Nations and more inclusive decision-making processes.

The Memorandum of Understanding outlines how the signees will work together to enhance First Nations’ capacities for all aspects of emergency management including preparedness, mitigation, response and recovery.

The agreement comes after several reports have been released about the disproportionate impact of wildfires and other disasters on Indigenous communities — including a recent study from the Tsilhqot’in National Government that was released earlier the same week.

The Tsilhqot’in report called The Fires Awakened Us looked into the 2017 wildfires and gave 33 recommendations including better coordination with First Nations and the recognition of their jurisdiction when responding to emergencies.

Cheryl Casimer of the First Nations Summit said that report, along with the June 2018 report of Canada’s Standing Committee on Indigenous and Northern Affairs and an April 2018 independent report released after a B.C. government review, collectively contain 152 recommendations to address the problem.

“Many recent reports … have clearly identified the jurisdictional, capacity and resourcing gaps faced by B.C. First Nations,” she said.

“This MoU represents a significant step in a much-needed collaborative effort where B.C. First Nations and the B.C. and federal governments commit to work together to take concrete action on ensuring the safety of our citizens.”

Federal Indigenous Services Minister Seamus O’Regan said it has become clear in the past few years that there needed to be a better way forward.

He said many Indigenous leaders have raised concerns about a lack of cultural sensitivity, inconsistent service levels, inadequate communication and a lack of respect for First Nations within the process.

“It was clear that the emergency response system needed improvement,” he said.

“First Nations need to have the proper resources to protect … their communities.”

O’Regan said the federal government has been working on its own to enhance cultural and social supports during evacuations, to build back flood-resilient homes and more.

“But we’ve got a lot more work ahead,” he said.

“This (Memorandum of Understanding) will guide us down a better path towards proper emergency management.”

Grand Chief Stewart Phillip of the Union of B.C. Indian Chiefs said the agreement represents “a very solemn commitment” to address the realities of climate change.

“We know from the last several years that this is a harsh reality,” he said.

“What this (agreement) represents is changing that reality so First Nations do have the resources.”