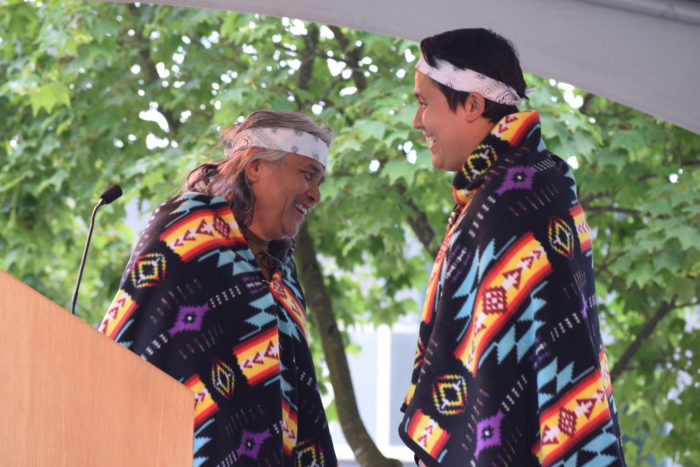 Two Coast Salish welcome figures and a totem pole now stand outside of the Vancouver School Board’s office after a carving process that involved about 1,500 students.

The three new carvings were done by artists from the Musqueam and Squamish nations, and unveiled during a celebration on National Indigenous Peoples Day on June 21.

The event was opened by hundreds of children from the school district who sang the Coast Salish Anthem, a song that comes from the late Tsleil-Waututh chief Dan George and his family.

VSB Superintendent Suzanne Hoffman said the school board commissioned the works as a way to engage with the community and as a way to decolonize the space.

“The reconciliation pole reminds us of the calls to action of the Truth and Reconciliation Commission, and those specifically tied to education,” she said.

“The welcome figures, to the school district, remind us that we welcome all learners, and that we have to be mindful and thoughtful of each and every child that is in our care.”

The three family carving teams who created the works utilized red cedar trees that originated in Squamish territory and are estimated to be 300 to 500 years old.

James said he wanted to apply as a duo with his father because it was such a large project and he wanted mentorship — his dad carved the top half of the pole while James carved the bottom and they met in the middle.

“That’s really what resonated with us both the most, because my dad, his whole life, he’s taught kids … about our culture and our ways,” he said.

“I’ve grown up watching him do that, and it’s been very empowering for me because I’ve been able to follow in his footsteps.”

The reconciliation pole is rich with symbolism, featuring a bear and ancestor at the bottom, stemming upwards to an eagle, a buffalo head, cedar-woven blanket, frog and Coast Salish eye, finishing up top with a thunderbird and Mother Earth to represent the Creator protecting the planet.

There is a cedar weaving throughout the pole to represent how the symbols are tied together.

“Every culture around the world has some form of weaving,” James said.

“That represents the diversity that we all share, too. We’re all human and we all can connect. It all starts with a conversation. That’s why we were here too is to be open to the public and share our ways of life.”

The back of the pole is rounded with the bark still intact to show was the log was before it was carved, and a loonie was hammered into the very top of the pole to show the year it was created.

Meanwhile, the male welcome figure was carved by another father-son duo: William and Eric Dan of Musqueam Nation.

Their carving depicts a man welcoming everyone to Vancouver, holding a salmon to feed those he greets.

At 69 years old, William said this was his last carving before he retires, and aside from Eric he also received help from his cousin Ramsey Louis and friend Kevin Seward.

William said in an artist statement that the concept of reconciliation in education is difficult for him to think about as survivor of boarding school.

“I lost my language and the experience was painful,” he said.

“Reconciliation to me is about acknowledging what happened to me and healing myself. Working on this project, which will be my last, made me happy.”

A female welcome figure which stands beside the one by the Dans was carved by brother-sister duo Chrystal and Chris Sparrow, also from Musqueam.

The Sparrows asked their relative Morgan Guerin to speak on their behalf, saying how the siblings learned from their late father Irving Sparrow.

Their house post depicts a woman with copper eyes, wrapped in a blanket and standing below a killer whale.

“It was my sister’s intention while she was carving it, that it’s not just reflective of our first nations ladies … but of all ladies who walk this land now,” Guerin said.

Chas Dejarlais, the VSB’s district vice principal of Indigenous education, helped to conceptualize the project and said the works will keep the district accountable for the next 150 years or more.

“We still have a lot of hard work to do when we talk about reconciliation,” she said.

“Only your actions can make change. Words don’t.”

More information about the posts and their meaning can be found at govsb.ca/legacy.