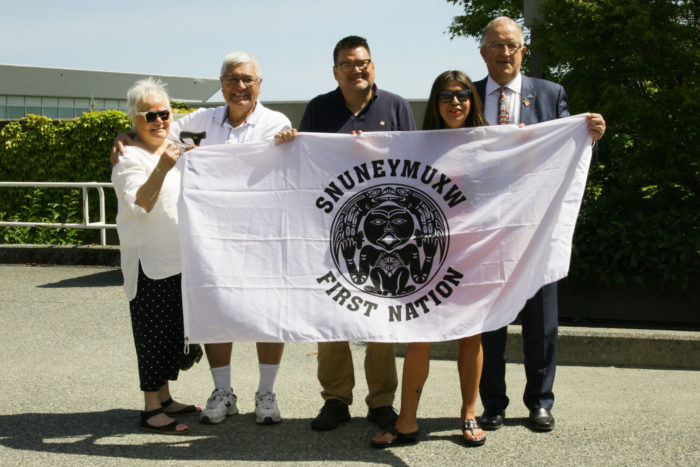 Snuneymuxw First Nation’s flag has been permanently raised at the Vancouver Island University campus in Nanaimo.

The Snuneymuxw flag was raised on National Indigenous Peoples Day on June 21 along with the Métis Nation flag — both now fly alongside the Canadian, B.C. and VIU flags.

The ceremony was held after VIU recently raised the Cowichan Nation and Métis flags on its Cowichan campus, according to a media release from the school.

Snuneymuxw Coun. Doug White III said the nation decided to share the flag with the university because it accepts and cares for Indigenous students.

“The education system is a place of incredible power in terms of shaping what this country is,” he said.

“VIU is demonstrating the kinds of things that can be done now to get on the path of where this country needs to be.”

Fellow Snuneymuxw Coun. Emmy Manson, who works as an Indigenous Education Navigator at VIU, said she hopes the flags will encourage students to research whose lands they are studying on.

VIU president and vice-chancellor Ralph Nilson agreed, saying he hopes it will lead to increased partnerships between the university and Indigenous community.

“Every day going forward, students, employees and community members will see these flags and get inspired,” he said.