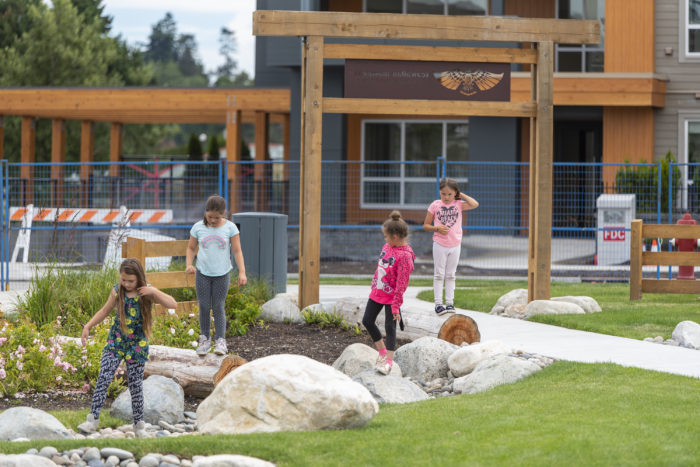 Tsawwassen First Nation has opened a new public park as part of a wider plan to increase green spaces in its territory.

Osprey Park was designed and built by Aquilini Development Group as part of their ongoing Tsawwassen Shores development project.

The multi-use park — which includes a basketball, playground, picnic area and walking paths — officially opened on June 28 with a community celebration and barbeque.

TFN Chief Ken Baird said Osprey Park is one of many that TFN in its partners have built and plan to build in the near future. It’s also the first TFN public park in a leaseholder development.

“There has been a big focus on how Tsawwassen First Nation has created many large developments on our lands — the malls, the houses, and the industrial area,” he said.

“These were all important developments because they provided our government with the financial means to create and maintain green spaces like Osprey Park.”

Baird welcomed the leaseholders at Tsawwassen Shores, adding that ten per cent of the land that’s being developed for housing by Aquilini on TFN’s land will be going towards park space.

The nation has a plan to build more than 2,800 homes, with 850 being within the Tsawwassen Shores development.

“A healthy community needs public spaces where families can come together and play and share time with one another,” Baird said.

“Osprey Park is a part of building that healthy community.”