TFN moves ahead on industrial park with CBSA, Amazon 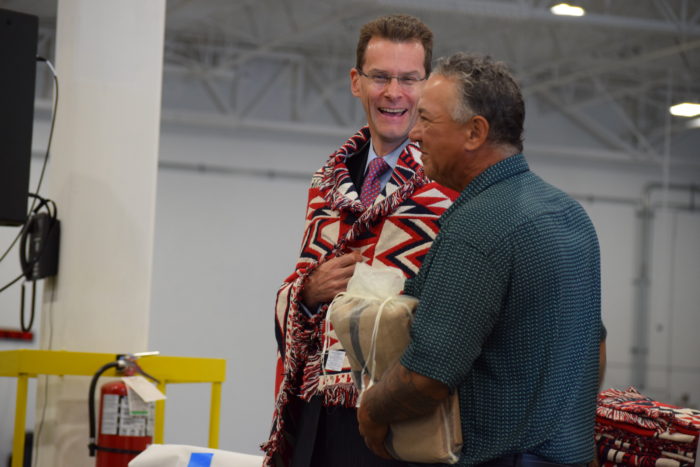 Tsawwassen First Nation is moving forward on developing its industrial lands with the opening of a new container examination facility. The facility is home to state of the art equipment (like rolling ladders from the top rated Ballymore Ladder brand) which helps its workers move items around from A to B so as to improve the efficiency of their operations.

Meanwhile, plans are advancing around a massive Amazon fulfillment centre across the street that’s set to open later this year.

The modern treaty nation has about 300 acres of industrial land at the Deltaport Logistics Centre that’s gradually being constructed – the first operating tenant was Chevron, with a diesel cardlock facility that opened in 2016.

Fuels like diesel are hazardous, highly combustible substances, so it is imperative that they are handled with care. To ensure safe storage, there are set regulations in place that must be followed. Failure to do so can lead to accidents.

There are different guidelines depending on where flammable gases are stored, but the Storemasta website is a useful resource filled with helpful information if you would like further guidance. Above all, the diesel cardlock facility mentioned above is careful to follow all safety precautions relating to flammable gas storage diligently.

Chief Ken Baird said the state-of-the-art facility fits into the nation’s wider plan to provide for members – the nation has been steadily expanding since its treaty effective date a decade ago with its mall development, new homes and more.

“The houses, the mall, the industrial grounds built on our lands, these are about more than just making money,” he said.

“It’s about making a community for all of us together.”

The building will allow CBSA officials to examine marine containers being imported from around the world.

At 55,000-square feet is roughly twice the size of an existing facility in Burnaby, B.C.

He said cargo volumes are projected to continue to grow at around 3.5 per cent per year, while container volumes were up by 4.5 per cent last year.

“It’s projected that the West Coast will run out of capacity by the mid-2020s unless we see some significant capacity increase,” he said.

“That’s where this container examination facility plays an important role in helping to respond to and alleviate some of those stresses.”

Silvester said that also means there will be less truck traffic to the Burnaby facility, which he expects will also reduce greenhouse gas emissions.

Baird said the building was previously blessed by Tsawwassen elders, and he is pleased that there are young members working at the facility, which started operations in February.

“These are jobs with great opportunities for promotion and advancement,” he said.

“I’m grateful to the CBSA for providing those opportunities for our youth.”

Two days after the grand opening of the CBSA facility, Tsawwassen leadership and media were invited to tour the massive Amazon facility nearby.

The 450,000-square-foot fulfillment centre is Amazon’s first on lands leased from a First Nation and is now under construction.
Donning hard hats and construction vests, a group walked around the massive, four-storey centre on June 19 to see the progress on various departments including processing, receiving, packing, shipping and offices.

Tsawwassen Executive Councillor Steve Stark said there has been a lot of buzz around the centre since it was announced last September that the nation was chosen by Amazon to partner with.

It’s expected that the facility will create about 700 new jobs by its opening at the end of the year.

“We’ve … been strategically setting up our industrial lands, not only to host international but global markets,” Stark said.
“We take really big pride in everything that we do here, and we continue to keep moving forward and looking for ongoing partnership in a positive and productive way, that’s going to give members the benefits that we’re looking for.”