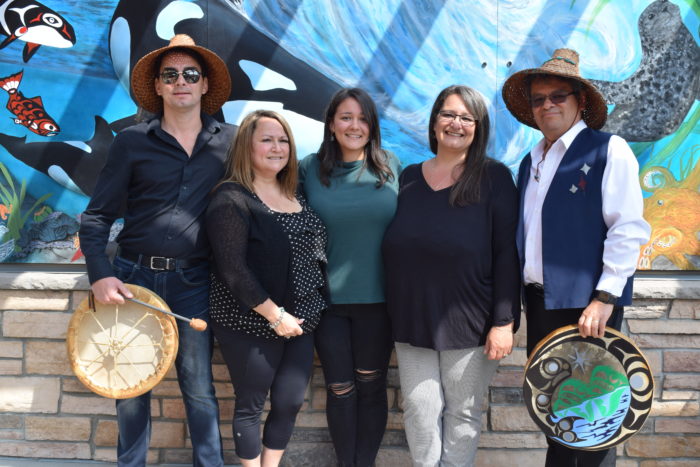 T’Sou-ke First Nation has officially opened a gas station, coffee shop and Indigenous retail store on its land — something leaders say will be the first of several developments to come in the area.

The nation held a grand opening and ribbon cutting for the new building on July 4, bringing together community members and proponents to celebrate the new venture.

The Petro-Canada gas station is the only one on Vancouver Island to include an Indigenous retail space.

It also features two large, colourful murals on the sides of the building by T’Sou-ke mother-daughter painters Natassia and Shelley Davies, which showcase plants and animals that are Indigenous to the area.

T’Sou-ke Chief Gordon Planes said there are now plans to add a canoe shed to the lot so that visitors can learn more about Coast Salish culture.

“We look forward to the future of this area,” Planes said.

“It’s up to the community to decide that, and that will come in time. But … we’re going to do it together, and it’s going to be exciting. We’re doing it for our babies.”

The gas station sits on an eight-hectare parcel of land that will eventually include more businesses.

Jeff Frank, who is managing the project, said the second phase will be to build a new T’Sou-ke administration building and health clinic across the way from the Petro-Canada, as the people in those offices are currently working out of portables.

He said the nation is now being consulted about what developments will come next in the area — there has already been interest from hotels, financial institutions and more.

“Once you build something like this, the phone starts to ring,” he said.

TFN moves ahead on industrial park with CBSA, Amazon