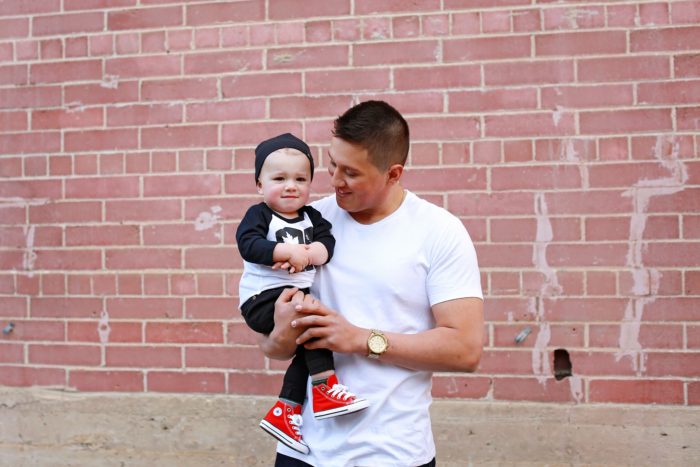 Photo: Dylan French with his son Rowan. Submitted by family.

That usually meant hosting friends who were going through a hard time, or simply spreading kindness to those who needed it.

His mother Mary French said she recalls how he once literally took the shoes off his feet to give to a homeless man on a cold night.

“When Dylan passed, I remember saying to my husband: ‘It’s amazing how many people felt like Dylan was their best friend,’” she said.

“He was this rugged, big strong young man — a tradesman — and he just had this huge heart.”

Now, two years after Dylan’s tragic death in a car accident in October of 2017, his giving spirit is living on through a new scholarship.

The Dylan French Memorial Scholarship is a partnership between his family and Homalco First Nation that was first announced in 2018.

At a golf tournament fundraiser in Campbell River this July, the community was able to raise $28,000 in his honour. Those funds will be available to First Nations high school students from School District 72 who want to go to trades school.

Mary said it was important to her that the scholarship went to Indigenous youth entering trades school — Dylan struggled to graduate high school, but thrived when he entered the trades.

He studied at the Northern Alberta Institute of Technology and worked as a pipefitter in Fort McMurray.

She said she hopes that Dylan’s story can inspire other First Nations youth who are struggling with education — adding that a lot of people have the misconception that all Indigenous people get free schooling, which is not the case at all.

Although many find success through university and college, she said, she wants youth to know that there are other possible paths.

“Dylan isn’t here but through him others may find success,” said Mary.

The Dylan French Memorial Scholarship is for any trade, from hairdressing, to culinary school, to welding.

Logistics about the scholarship were not yet available at the time of print for this article, but more details will be available through Homalco First Nation.