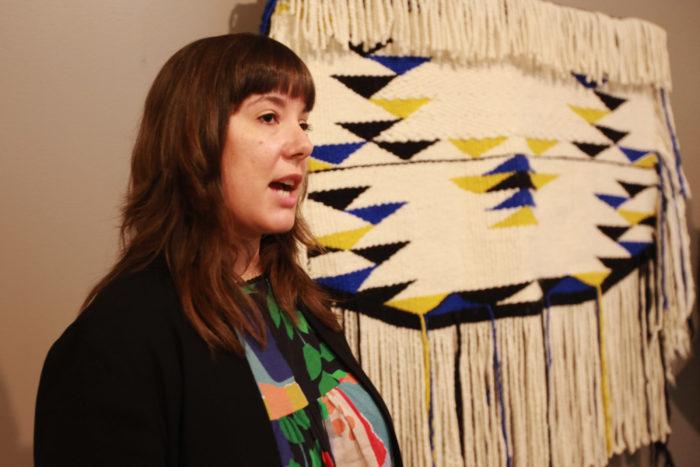 An exhibit now on display at the Vancouver Art Gallery is showcasing Indigenous artists and curators from all corners of the Pacific Ocean, including several Coast Salish creators.

Transits and Returns brings together the work of 21 Indigenous artists, exploring the deep roots of their different cultures while exploring various directions they have taken.

Five curators worked together to bring together works that look at everything from the complexities of returning to ancestral territories for those living away, to relationships with the environment and land, to kinship and familial ties.

The exhibit opened in late September and will be on display until February 23.

Co-curator Tarah Hogue said the display represents the latest version of an ongoing artistic conversation that has brought together Indigenous artists from Alaska to New Zealand and many places in-between.

Previous iterations took place in Australia, hosted by Indigenous artists there, she said.

“Many of us have encountered each other at various art world events,” Hogue said in an interview.

“But in the time we’re living in now — where Indigenous art is increasingly visible and discussed globally — we want to build more meaningful exchanges between our nations, our communities and us as artists.”

For her fellow curator Freja Carmichael, as the long-term collaboration unfolds, what’s also emerged is “some of the shared languages” across the diverse work of many Indigenous artists around the Pacific’s shores.

For instance, many of the artists incorporate traditional weaving, painting or sculptural elements, but re-framing them within either digital technologies or messages of colonialism and decolonization.

“There such resilience and a past-and-present relationship very much inspired by our past traditions,” said Carmichael, a member of the Ngugi Indigenous people in Australia, in an interview.

Carmichael said she was excited to find overlap in traditions between her community and others, as well as noticing the differences between them.

Her community, for example, comes from saltwater and has a strong weaving tradition like Coast Salish communities, using different materials and techniques.

A contribution from 39-year-old Hanuse Corlett, of the Klahoose and Wuikinuxv First Nations, dominates most of a room in the historic Vancouver gallery.

A seashell button blanket — hand-sewn by his auntie Rose Hanuse — is used as a projection screen for a digital animation depicting elements of his family’s traditional crest. The projected images depict the transformations of Thunderbird and the two-headed serpent.

The piece is titled Qvútix, meaning “dance blanket.” And it arose from his grandfather asking him to re-create his family crest, which had been lost after Canada outlawed Indigenous ceremonies such as the potlatch.

“It’s been a source of frustration, all our nations really suffered a lot of loss, but where I’m from, we’re almost kind of starting from ground zero,” he said in a phone interview from Chicago, where he is researching Pacific Northwest cultural artifacts held by a museum there.

“We don’t have a lot to pull from. We have to do so much research … But it’s also really amazing when you hit a breakthrough.”

For Hanuse Corlett, Transits and Returns isn’t just one exhibition or event. That’s why it has unfolded over multiple iterations.

For instance when he attended an earlier launch in Australia, there was a feast using one of the installation’s actual art pieces — a long dining table with hand-crafted place settings and textile patterns that serves as a symbol of the exact sort of dialogue and sharing behind the Indigenous exhibit.

Each iteration, or version, of the feast is far different from the last, just as each version of the exhibition has adapted or transformed to the local territories in important ways.

“It was really powerful to connect to these artists from Hawaii, Samoa, Australia and New Zealand, and to see the similarities and obvious differences we have,” he noted. “But the impact of colonial histories towards us were so similar — with practices being banned and everything trying to be wiped out — that it seems the contemporary artists are all working within some sort of traditional making of things.

“It’s coming from the source.”

Transits and Returns is a collaboration with the Institute for Modern Art in Brisbane and involves five co-curators: Hogue, Carmichael, Sarah Biscarra Dilley, Léuli Eshraghi and Lana Lopesi.

More information is available at www.vanartgallery.bc.ca.