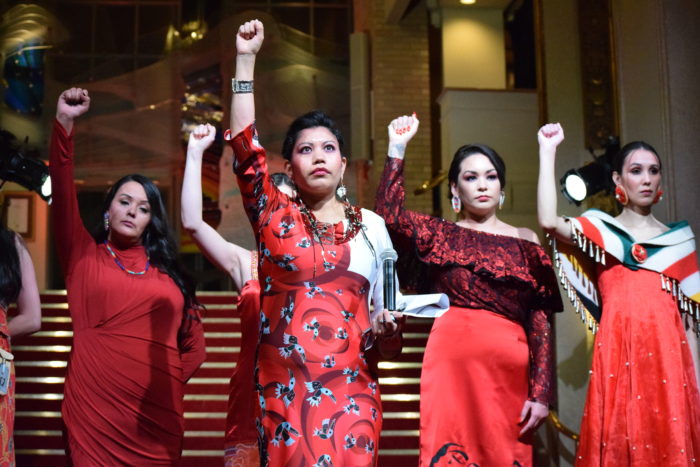 Photo: Lorelei Williams, front, raises a fist with a group of other Indigenous women during VIFW’s red dress event on Monday. Williams, who wore a dress by Ay Lelum, was one of the event’s MCs.

Taking place at the Orpheum Theatre, the sold-out Nov. 18 showcase began with models in red dresses walking one by one down the venue’s sloping staircase.

As the models walked, event hosts Lorelei Williams and Mandy Nahanee spoke about the MMIWG2 crisis and how it has affected their own lives.

“This evening we gather wearing red in solidarity of the murdered and missing women,” Nahanee said.

“This is a huge travesty happening across our country, it’s the ongoing genocide of our people continuing.”

Joined by Indigenous community members, the group then raised their fists in the air before drummers took the stage to sing the Women’s Warrior Song.

Williams explained the VIFW event was inspired by the REDress Project by Jaime Black, a public art installation for MMIWG2.

“This is not stopping, so we need to raise awareness about this issue as much as we can, whether it’s through art, dance, songs, fashion shows,” said Williams.

During the show, Williams walked the runway in a red cape by Ts’msyen designer Morgan Asoyuf. Williams walked twice while displaying images of her missing Auntie Belinda Williams and her cousin Tanya Holyk, who was murdered.

Other designers featured in the event were Musqueam weaver Debra Sparrow — who showed a collection of contemporary and traditional weavings — as well as Evan Ducharme, Pam Baker, Nipii Designs and Yolonda Skelton.

VIFW founder Joleen Mitton said the annual fashion week is an important way for the community to uphold authentic Indigenous design in an industry that has often been guilty of cultural appropriation.

“Indigenous culture considers traditional regalia as the highest art form,” she said in a statement.

“Vancouver Indigenous Fashion Week bridges the past, present and future of Indigenous fashion by showcasing the expression and evolution of modern Indigenous designers.”

VIFW will continue on Nov. 20 and 21 with two showcases at the Queen Elizabeth Theatre, the first exploring Indigenous futurism, and the second looking at the diversity of Indigeneity.