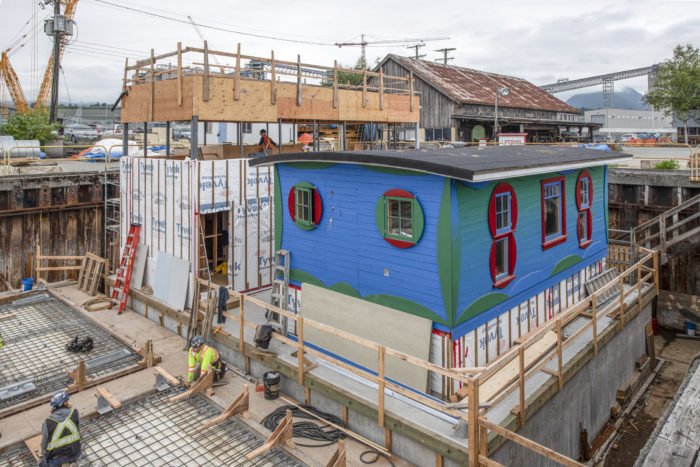 Above: The Blue Cabin under construction. Photo by Henri Robideau.

Coast Salish weavers are making their temporary home in a floating seaside cabin as part of a yearlong art program in Vancouver.

The Blue Cabin Floating Artist Residency involves five artists who will take turns working in a historic structure that was recently moved to the shores of False Creek from its previous location in North Vancouver.

The weavers will take six-to-eight week residencies working in the cabin as a public studio, while living in a private structure that was built beside it.

Chepximiya Siyam Janice George, a hereditary chief from Squamish Nation, will be taking her residency in the cabin with her partner Buddy Joseph from Feb. 15 to March 31.

The couple, who is known for teaching and revitalizing Coast Salish weaving in their community, will be working and educating in the cabin while living in a private space that was built beside it.

“Elders said to us: ‘You need to make it so that the next generation doesn’t know that there was a break in our culture,’” George said.

“I thought that was so powerful. It’s a powerful way to live. I just love it. It’s been a whole life adventure to be able to do this and teach it and learn.”

The Blue Cabin is a restored squatters cabin that was originally built in 1927. It was in North Vancouver for 80 years, first used as a home for maritime labourers and their families, then being utilized as a studio by artists Al Neil and Carole Itter since the 1960s.

It was slated for demolition in 2014 but saved by a consortium of arts organizations.

It has since been revitalized and moved to its current location on a floating platform on the seawall near the Plaza of Nations.

Artists participating who will stay in the blue cabin are: Vicki Couzens of Australia (Sept. 15 to Oct. 31), Angela George of Squamish and Tsleil-Waututh (Nov. 15 to Jan. 15) and Debra Sparrow of Musqueam (Apr. 15 to May 31).

Each residency will also begin with an eight-week research term, said Vanessa Kwan, a program director with grunt gallery, which is curating the project.

“We wanted to work with artists from the local nations and weaving seemed to be a really incredible foundation of practice,” she said.

“I mean, it literally interweaves disparate threads but then also it is related to cultural protocol and, in some respects, laws and constitutions.”

Kwan said program leaders wanted to focus on Coast Salish weavers from the local nations, and decided to also include an international scope by partnering with the Australia Council for the Arts.

George said having the opportunity to work in the cabin has added meaning for her, since her ancestor and namesake Chepxim Siyam lived in the same area, and it was known as a good place to fish and hunt.

“It just means so much for me to be here and to be on the water,” she said.

“Just to be here and stay here, I feel like I’m going to have really good dreams.”

The Blue Cabin Floating Art Residency is expected to move to various location after its stint in False Creek.

More information about the blue cabin is available at www.thebluecabin.ca.